Monticello, N.Y. — Before we consider the new 2016 BMW 7 Series, let’s clear the soft-hided elephant from the room: the Mercedes-Benz S-Class.

BMW must be as tired of hearing about the S-Class as we are of talking about it. But that’s what happens when a car sets a new benchmark and locks up four in 10 buyers in its segment. The lame-duck 2015 7 Series has hung on to a distant second place, but that’s small consolation given that it hasn’t actually outsold the Mercedes since designer Chris Bangle’s busy 7 Series managed the deed in 2005. (Yet another argument for the rehabilitation of Bangle’s reputation.) 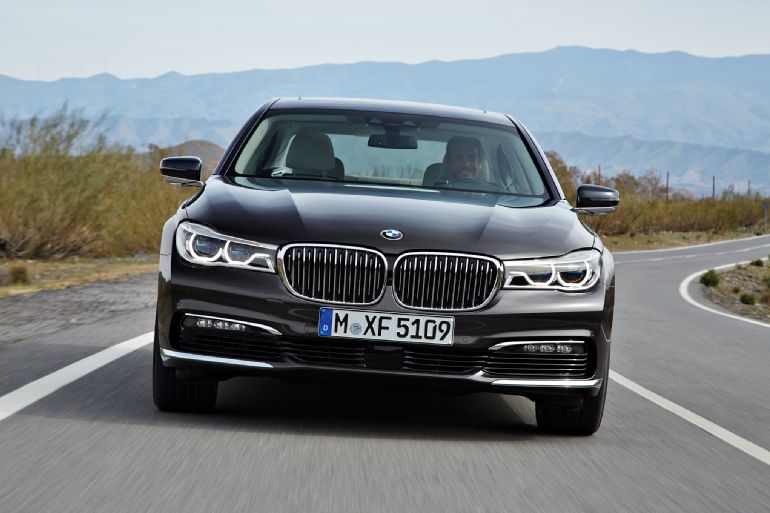 The redesigned 7 Series seems expressly designed to change the conversation. Whereas the S-Class has everyone blathering about interior design and semi-autonomous cruising, BMW wants to remind us that we should want to grab the steering wheel and drive ourselves.

That reminder is writ large at Monticello Motor Club. If a Benz S550 had taken a twirl at this private road course, it would have had rings etched on its paint every time the BMW ran around it. 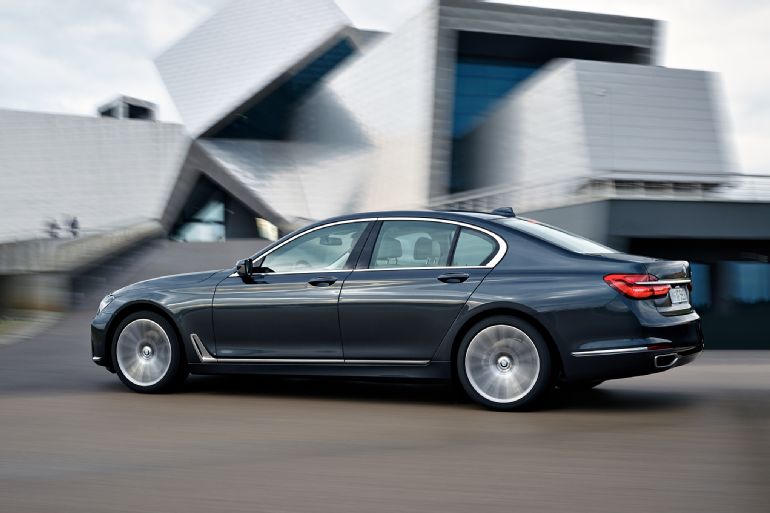 The 2016 BMW 7 Series is a better dancer than the S-Class largely because it’s lighter on its feet. Much of the new unibody, including the center tunnel, is made of carbon fiber — a payoff of BMW’s huge investment in the stuff for Project i. That helps melt away up to 190 pounds compared with the last 7 Series and represents a 100-pound advantage over a similarly equipped S-Class. The 7 Series is thus quicker than before, even though its engines — a revised 4.4-liter turbo V-8 and an all-new 3.0-liter turbo inline-six — make similar power to their counterparts in the outgoing car. The 445-hp V-8, which debuts in the 750i xDrive, blasts to 60 mph in 4.3 seconds, and the 330-hp 740i does it in 5.4 seconds. (An all-wheel-drive version of the 740i will debut in 2016, along with a four-cylinder plug-in hybrid called the 740e.) 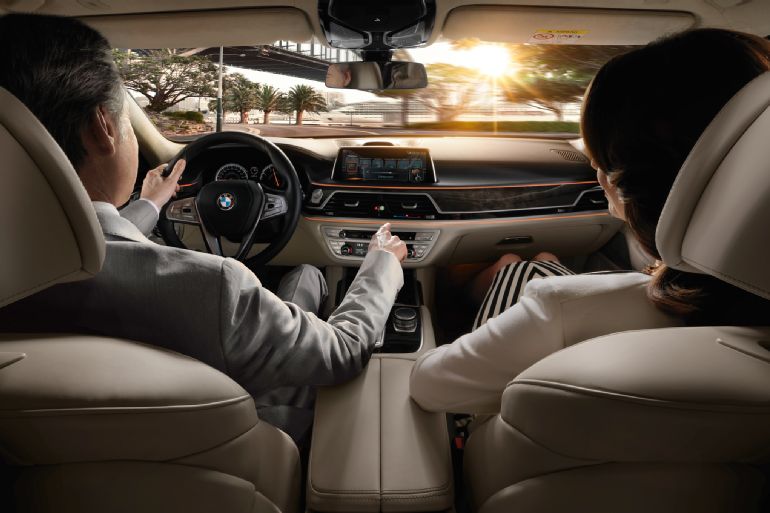 The lean, new body wears rather conservative clothing. The exterior is stately and tasteful, but safer than the sex in a Planned Parenthood brochure. Company designers clearly chose to go with the classic BMW hits, including the biggest twin-kidney grille to ever grace a BMW sedan. 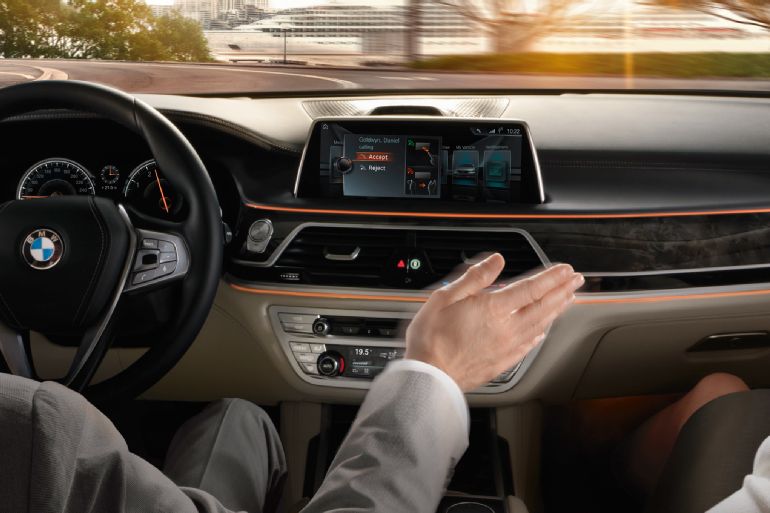 An M Sport package does kick the visuals up a notch with an aggressive front apron, rear diffuser and side skirts, 19-inch aluminum wheels with summer tires (20s are also available), and an Alcantara headliner. 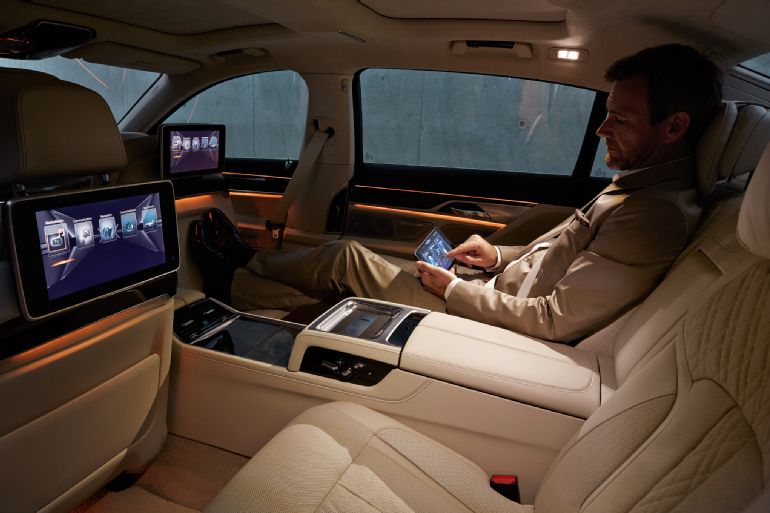 Overall, the redesigned cabin doesn’t quite match the flowing, Matisse-like artistry of the Mercedes S-Class’, but it flatters several senses and brings its own one-upping technology to bear.

One is industry-first Gesture Control, whose gestures might include a flip-off to Mercedes or Audi: Twirl a finger in the air and audio volume rises or falls accordingly. Point at the tombstone-shaped central touchscreen — part of a handsomely upgraded iDrive system — to accept an incoming call, or wave a haughty hand to dismiss it like a time-pressed Hollywood agent. Pinch and pivot fingers to pan a 360-degree exterior view for worry-free parking. What seems like magic is actually an infrared camera in the headliner. 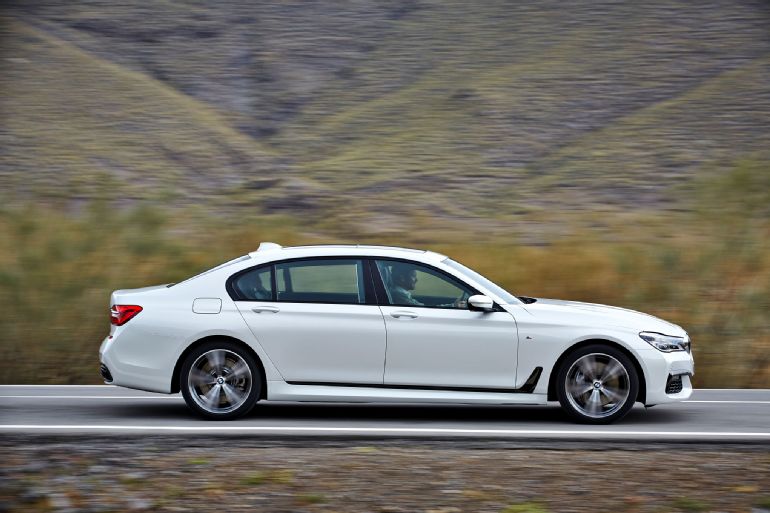 With back-seat perspective so critical to these cars, BMW has stretched the 7 Series about an inch longer than the last long-wheelbase model to offer the most rear-seat legroom in the class. (The slow-selling short-wheelbase model disappears in the United States.) The extra space clears the deck for a $4,050 Executive Seating package with a single, right-side recliner and powered footrest. This four-passenger version houses a folding picnic table and pop-out Samsung tablet in its center console, the latter controlling seemingly everything but the chauffeur’s mood and the S&P 500 average. The Wi-Fi-connected tablet is so cool that it really should be standard on every model, even if you’d have to stow it in a glove box or bag rather than its console perch.

Yes, it can drive itself … 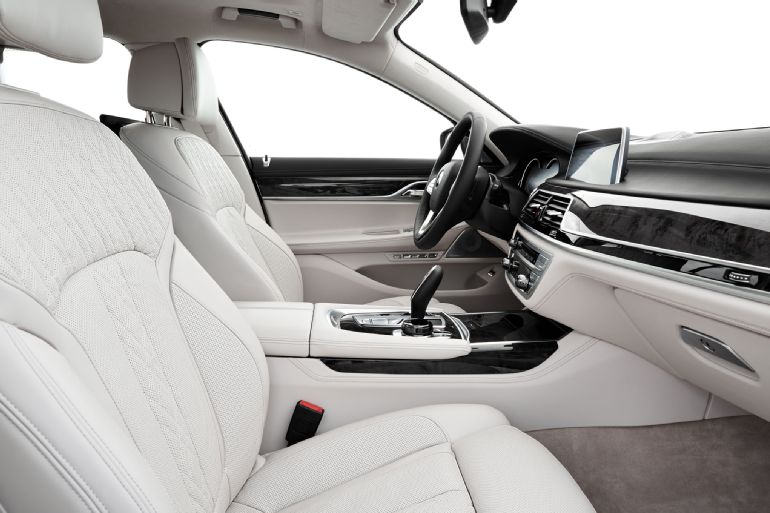 BMW has been paying close attention to the autonomous innovation at Mercedes. The 7 Series can now steer itself at speeds up to 130 mph (you can keep your hands off the wheel for 15 seconds at a time). Optional suspension technology can incorporate data from the nav system to adjust the dampers, air springs, and anti-roll bars ahead of time, providing remarkable ride quality over bumpy roads. Also, BMW is bugging American regulators to approve a key-fob-operated feature that lets the car park and retrieve itself from your personal garage without you needing to be in the car. 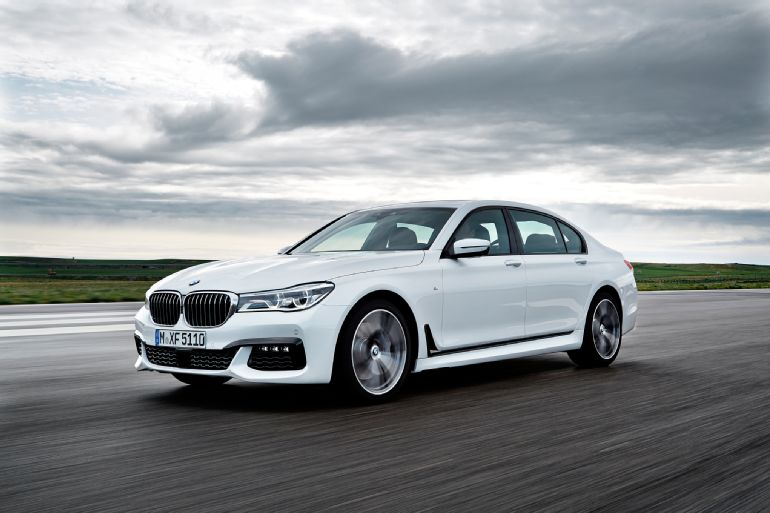 … But we’d rather take the wheel

What makes the 2016 BMW 7 Series stand out is how it feels as we hustle and muscle around Monticello. Our test car, a 750i xDrive, is a big tuna for sure, but it’s hardly fish out of water, aside from brakes that need rest periods before plunging back in. On two-lane roads through the Catskills, the 7 Series tracked through corners at speeds that would embarrass an Audi A8 or Mercedes S-Class. 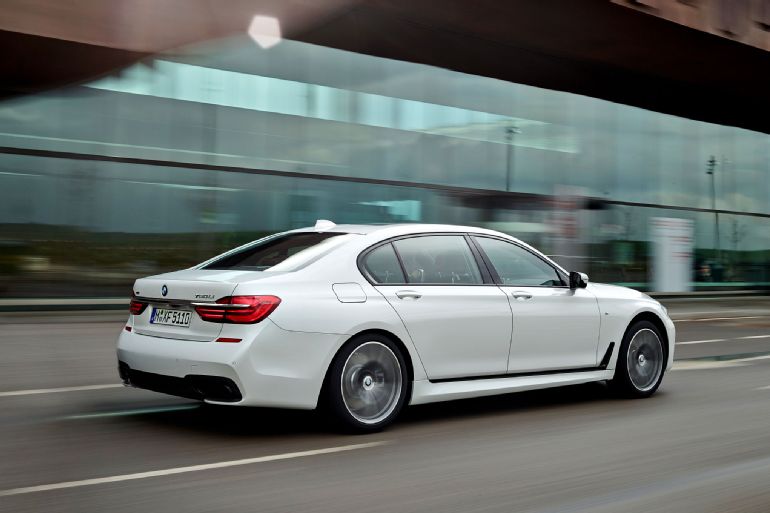 Better yet, this capability comes with old-school involvement. The 2016 7 Series feels like a traditional BMW, not a computer-controlled magic carpet. Steering weights up beautifully in sync with rising g-force loads. The 750i xDrive, with its boost-happy V-8 and snappy ZF eight-speed automatic, packs the kind of wallop you associate with full-blown M models. It’s definitely sharper than the puffy S-Class and is as legitimately fun-to-drive as the wonderfully focused Jaguar XJ.

Fun-to-drive has always been the 7 Series’ calling card, as we’re reminded when we drive well-preserved classics that BMW has lined up in Monticello’s paddock. We slip into a 1978 733i (the ’77 was the first sold in America) that appears barely larger than a modern 3 Series and has a scrawny steering wheel, a wood-knobbed four-speed manual transmission, and a manual parking brake. The infotainment system is a Blaupunkt radio and a cigarette lighter on the dash. The beloved and muscular third-generation car from 20 years ago, with its “Ronin” car-chase vibe, makes an even more emphatic statement: These cars were about performance first, luxury second, gizmos and gadgets hardly at all.

There’s no going back, of course. BMW cannot ignore the luxury and technology of the Mercedes-Benz S-Class. But as it reckons with Mercedes, the new 7 Series at least remembers that it’s a BMW. Pass through the anteroom of digital assistants, accept your spa session of wafting perfume and massaging seats, and you’ll still be whisked back to the old BMW gym, where muscle still rules and a perspiring workout awaits. 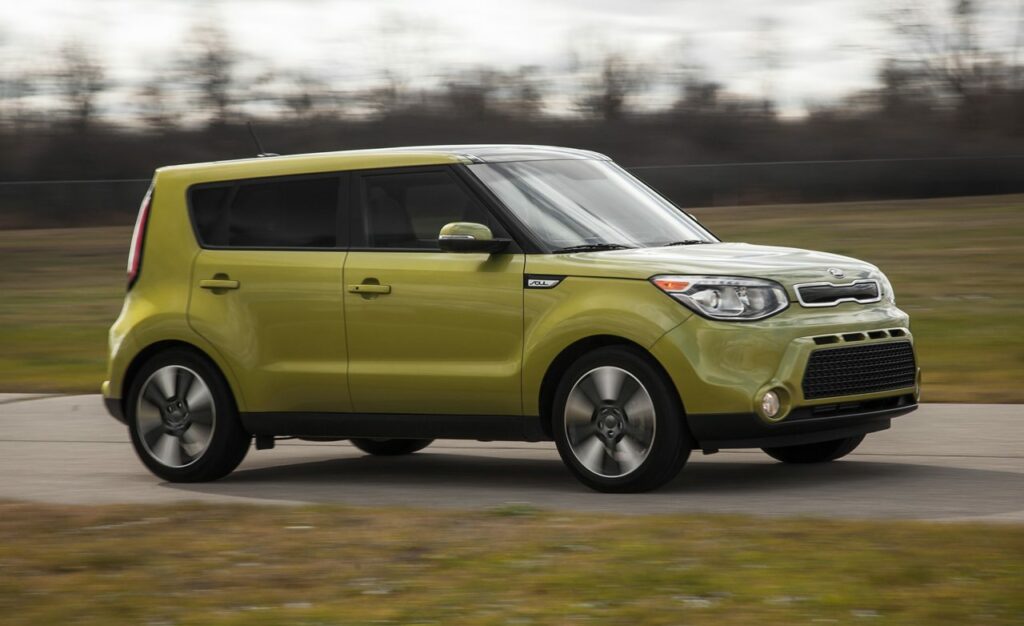 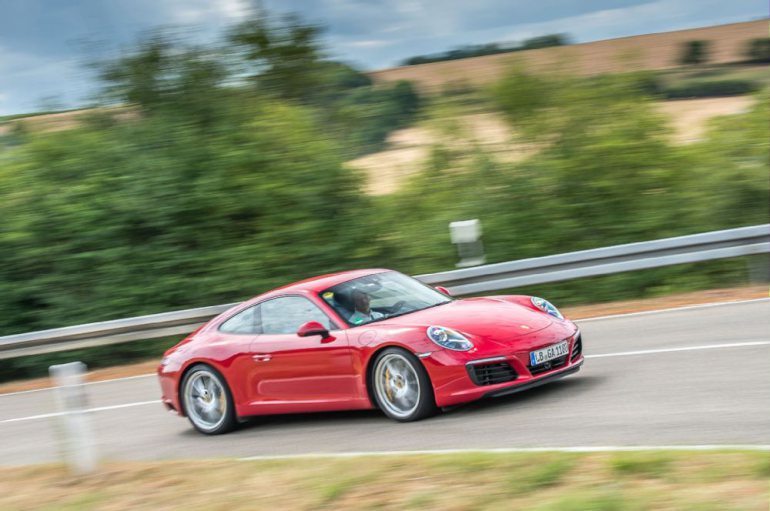