Since the Dodge Hellcat Charger and Challenger were introduced last year — a 707-horsepower sedan and coupe that were actually useable as daily transportation, and for about $65,000 – the Dodge Viper, with (cough) just 645 horsepower and a base price of about $85,000 seems almost irrelevant.

After all, Dodge has had to discount the Viper to move just 1,000 or so per year, while Hellcats are flying out of dealerships’ doors at a premium, as orders pile up. 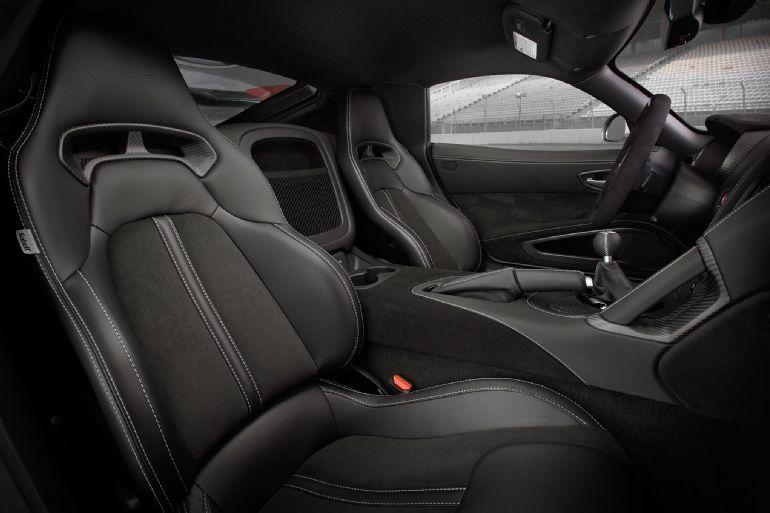 But rather than curl up in a corner and pout, Viper strikes back with the 2016 Dodge Viper ACR that is, in a word, astounding. Few cars have walked the thin line between “street legal” and “track only” with more success. We weren’t able to get numbers during our laps at Virginia International Raceway’s longer circuit – more than four miles – but we can say confidently that we’ve never driven a street-legal car so precisely, so brutally adapted for racetrack duty.

On VIR’s longest straight, we have hit 145 mph in multiple Vipers over the years, and since the ACR has the same 645-horsepower, 8.4-liter V-10 as every other Viper (adding more power would require too-expensive government recertification, Dodge told us), the fact we saw about 145 mph in the ACR makes sense. This is not a straight-line speedster – in fact, Dodge says the top speed is 177, compared to 206 mph for the base car. 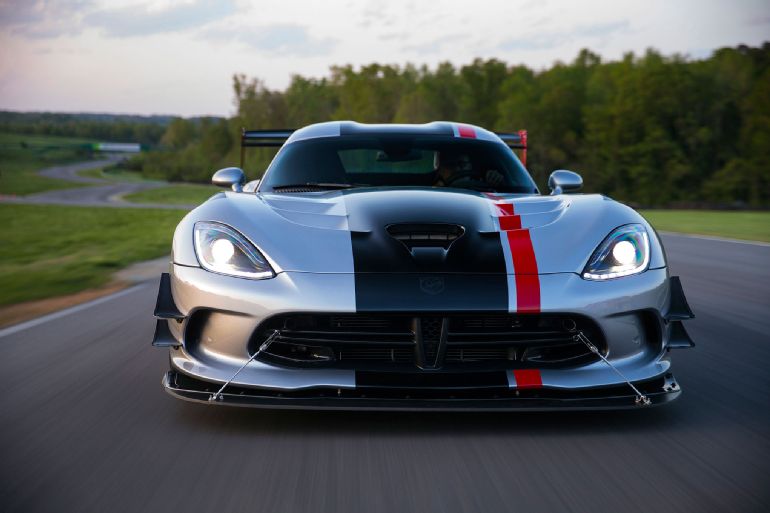 Why? Downforce. The massive rear wing, the adjustable front splitter, and dive planes produce 1,533 pounds of downforce at the ACR’s top speed. With the “Extreme Aero” package, an even more aggressive dual-element rear wing, a bigger front splitter and other add-ons, top-speed downforce increases to 1,710 pounds. It’s allegedly the most downforce offered by any street car. Downforce hurts top speed, but man, it makes up for it in the corners.

Indeed, downforce is one of the three best things about the new ACR. The other two: The custom-built Kumho – yes, Kumho – tires that should launch the brand as a legit supercar tire supplier. And the ACR’s standard Brembo carbon-ceramic matrix disc brakes are just incredible. Lap after lap, the Kumhos and the Brembos – six-piston calipers up front, four pistons in back – just don’t give up. And we’re told the very lightly treaded Kumho Ecsta V720 tires can actually be driven on wet pavement, but if you encounter standing water, expect to hydroplane into the next zip code.

You might think that performance-enhancing weight savings – some lightweight carpet; a “minimal three-speaker audio system,” Dodge says; thin, manually-adjustable seats – mean the interior is a penalty box. Not so. Alcantara is everywhere, including on the steering wheel; the “minimal” stereo still sings decent sound and provides Sirius radio, navigation and Bluetooth; there’s air conditioning and power windows. What else do you need? 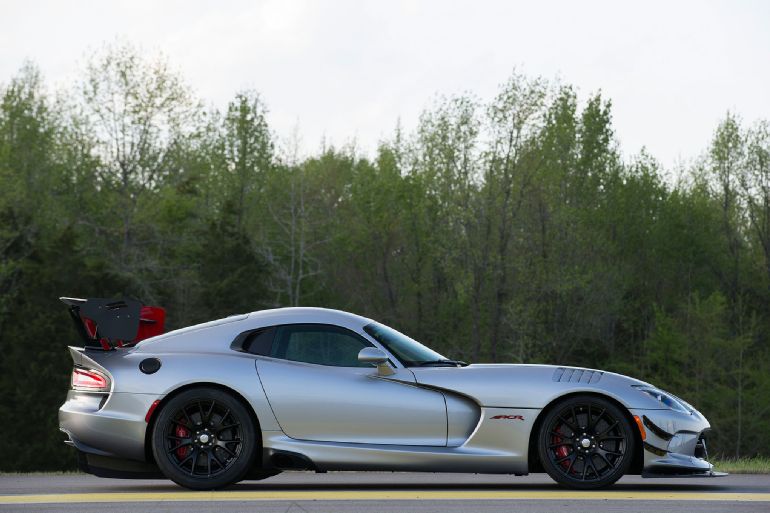 The downforce, tires, brakes, and suspension make this car a marvel. That suspension uses coil-over, double-adjustable Bilstein shocks that have 10 settings, and can raise or lower the car as much as three inches. Dodge plans to offer some basic setup sheets for some sample tracks, with suggested suspension settings and tire pressures.

So what’s it like to drive? Spiritual, almost. You can brake so much later than you think you can; you can take turns so much faster than you can imagine, as the suspension and the stunningly good Kumhos – 295/25-19s on the front, 355/30-19s on the rear – work their magic. Incidentally, one place Dodge didn’t try to save weight is in the surprisingly heavy tires and wheels, because with all that downforce, the wheels and tires have to be beefy. 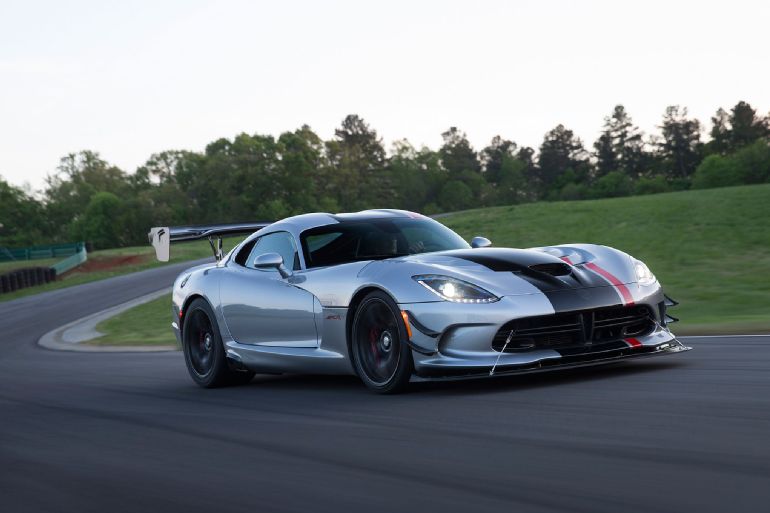 With 600 lb-ft of torque, the ACR launches out of corners almost indifferent to what gear you select; indeed, first gear is good for 60 mph. Spirited driving is really pretty easy, as the ACR forgives you, unless you dial out all of the five-level traction control. (Don’t.) Brakes and steering are linear, and once you master the balky shifter, the average human can go pretty fast.

Yet it was a balls-out ride with one of the development engineers, Chris Winkler, a former racer with thousands of laps in Vipers, that showed us just how fast this car is. I’ve raced in the now-defunct Viper Challenge series, and driven plenty of the old ACRs – they ceased production in 2010 – but my cut-parry-thrust ride with Winkler was the fastest I have ever been around a racetrack in a street-legal production car. He says this car is at least five seconds faster on the track than the last ACR. I think his estimate is conservative.

Yes, the Hellcat Charger and Challenger are better at four-alarm burnouts, and the sound of a powerful V-8 drowns out the Viper’s V-10.

But if you need a weapon – a car that can take on a road course and destroy lap records – the 2016 Dodge Viper ACR moves to the front of the line. We’d suggest adding a roll cage – Dodge doesn’t offer one, but cages for the last-generation ACR will fit – and consider at least a four-point harness as mandatory, preferably six-point, because the standard three-point belt does nothing to hold you in the seat under the drop-anchor braking. (Keep the three-point belt in the car for street driving – in some jurisdictions, racing belts are illegal.)

15This is not a car for your teenager, or for a mediocre track-day participant who would be better off with a used Miata. This is a serious, scary car — and we want one. Now. 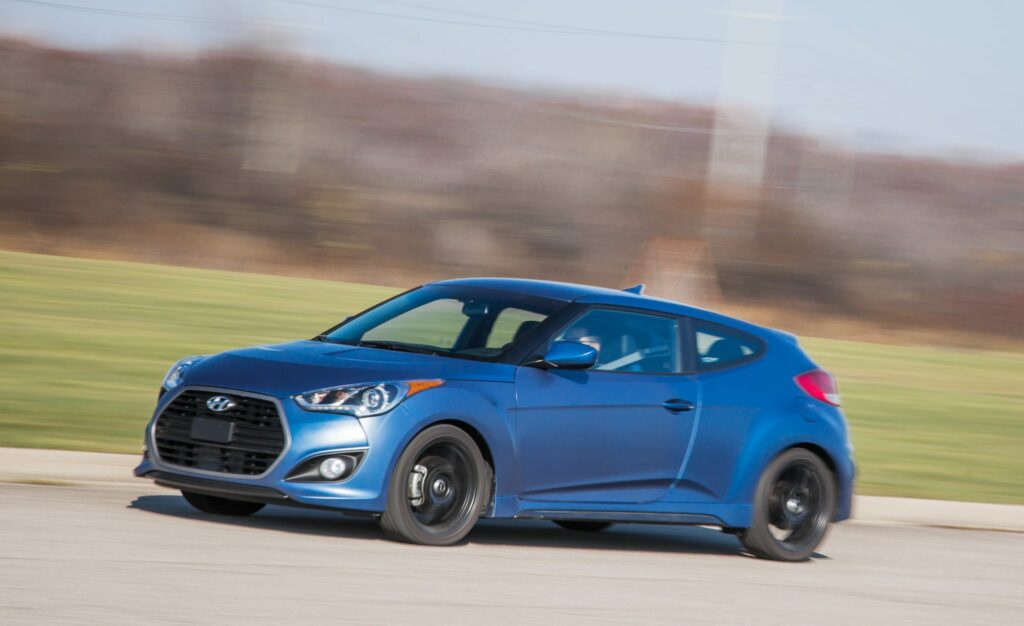 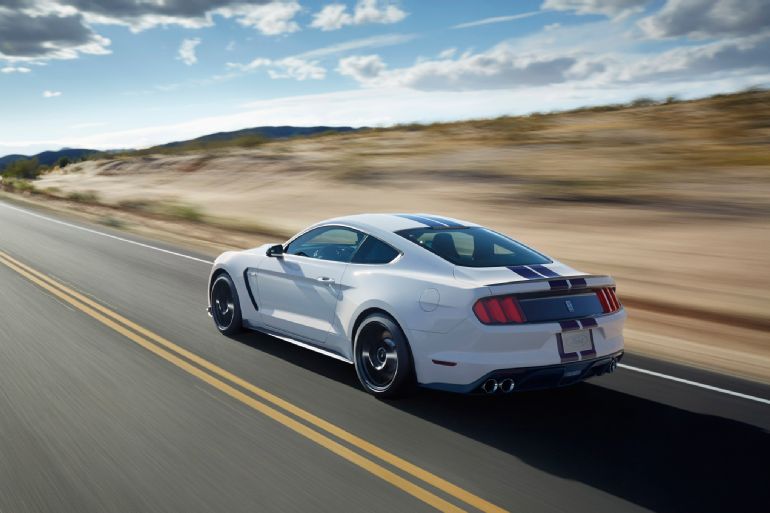