SAN DIEGO, California — A sedan is so boring, isn’t it? All it does is carry people. In comparison, a sport-utility is a little miracle of cleverness. It can carry a lot of people plus a dog (and maybe small children, if you must). It can carry people to places where there is sand, dirt, mud, or snow. It can take stuff along, and this stuff can be stashed in the cargo area, strapped to the roof, or towed in a trailer. And the sport-utility makes the trip both comfortable and entertaining with a long list of specially designed features so thoughtful that even the door pockets are smart. Durable hardware, lots of special equipment, and safety and security — this is what a sport-utility is made of.

It’s in this spirit that the 2016 Ford Explorer has been refreshed. It’s the same SUV you remember, only the list of the things it does for you has grown even longer. There’s a more powerful turbocharged four-cylinder engine, so you can get good gas mileage yet still tow a boat. There are twin cameras to see ahead and behind, lots of sensors to sense, and the ability to park itself automatically (hands free!) at the grocery store. The 2016 Ford Explorer Platinum even gets dressed up so it looks like a Range Rover. Now, if only the Explorer were a little bit better at carrying people. 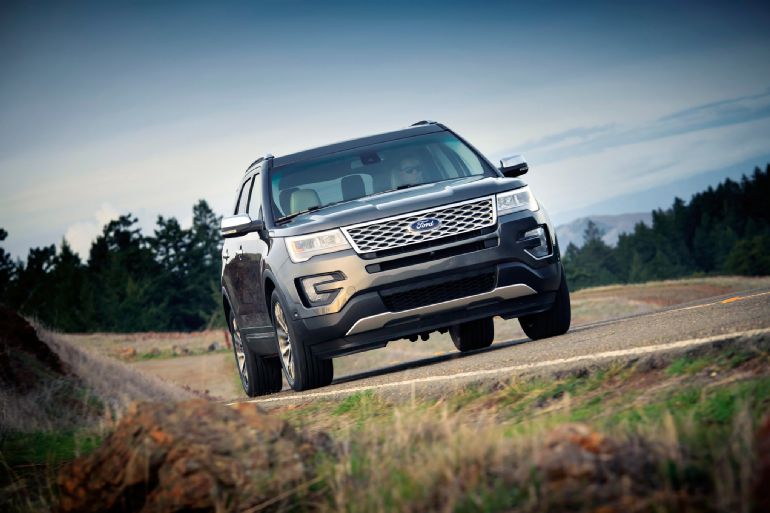 Dressed up but not too pretty This might come as a shock to you, but lots of people like a sport-utility that looks like it’s meant for outdoor utility, not limousine duty. So the 2016 Ford Explorer still looks like an Explorer, only one that perhaps runs with a better crowd. A new front fascia delivers some welcome visual drama, and it includes headlights high on the front of the truck where they complement a new Range Rover-style grille. (The LED low-beam lights are matched with halogen high beams.) Meanwhile, clever ducts in the front fascia direct a curtain of air across the front wheelwells, reducing aerodynamic drag.

Some things about this revised sport-ute are simply all about style, and the 2016 Explorer Platinum is full of them. This new trim level sits atop the customary ladder of base, XLT, Limited, and Sport iterations of the Explorer, and it is meant to compete with the luxury editions of the GMC Acadia and Jeep Grand Cherokee, the Explorer’s prime rivals. 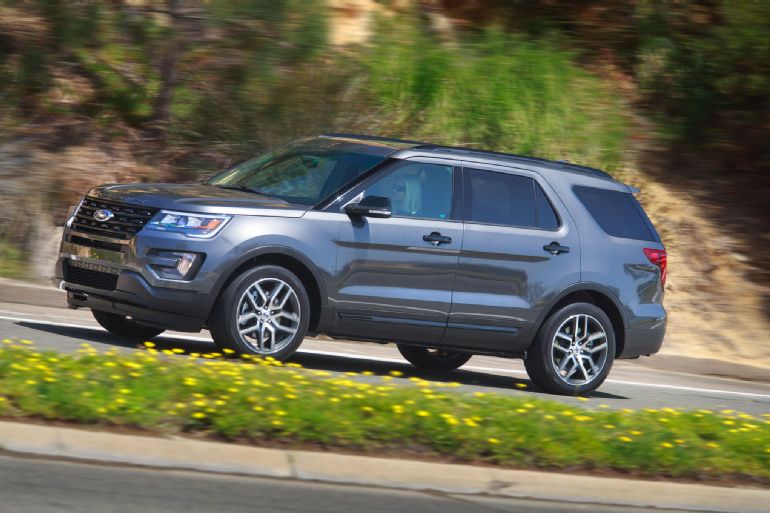 As you’d expect, the Platinum includes every feature on the Explorer’s long, long list of equipment, notably the new, enhanced Park Assist that can not only automatically parallel park at a curb but also identify a conventional perpendicular parking spot and reverse the Explorer into it. Most important, the Explorer Platinum looks good thanks to features such as 20-inch wheels, chrome exterior flourishes, and a far livelier interior treatment that includes wood and chrome trim pieces, a panoramic moonroof, leather-upholstered seats with unique stitching, and a 10-inch video display.

An SUV is what it does, not what it looks like What the 2016 Explorer does is pretty familiar. You can have it in front-wheel-drive trim or an all-wheel-drive calibration that actively varies the torque split between the front and rear wheels according to road conditions. The all-wheel-drive system also lets you manually prepare the Explorer for normal traction, sand, mud, or snow by engaging the Terrain Management System, which will deliver an appropriate combination of engine power, transmission shift schedule, ABS activation, and torque split for each circumstance. Hill-descent control is also part of the all-wheel-drive system. 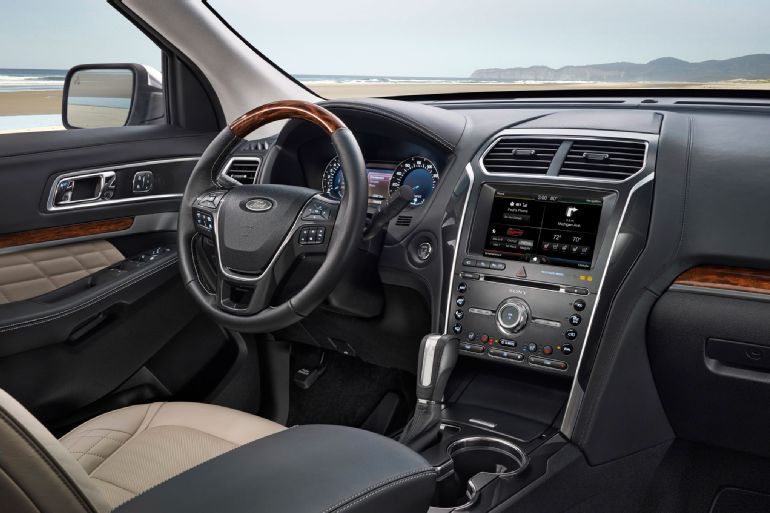 But there is big news here, and it lies in the turbocharged four-cylinder engine, which has been pumped up to 2.3 liters from 2.0 liters to make 17 percent more horsepower and 15 percent more torque. Thanks to the added displacement, the engine delivers 280 hp at 5,600 rpm and 310 lb-ft of torque at 3,000 rpm. Fuel economy remains much the same as before in front-wheel-drive trim at 19 mpg city and 28 mpg highway (1 mpg less for each in all-wheel-drive trim). 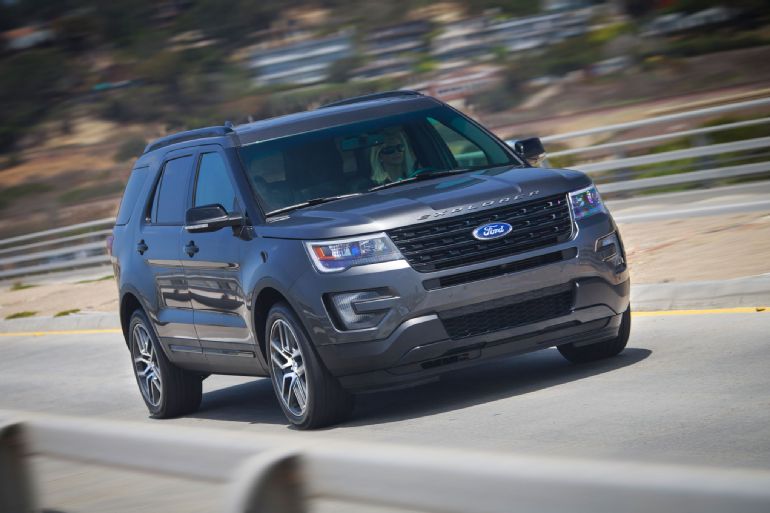 The 2.3-liter turbo-four’s performance makes it possible to match this engine with a towing package for the first time. Of course, Ford hasn’t been able to suspend the laws of physics, so this is simply a Class II towing rating that amounts to a capacity of 3,000 pounds. Nevertheless, this should be enough to tow motorcycles, watercraft, or a pop-up camper.

Driving an SUV in a four-cylinder world It’s hard to believe we live in a world where rational people might equip a 4,500-pound sport-utility with a four-cylinder engine, yet we weren’t horrified after driving a 2016 Ford Explorer XLT with the turbocharged 2.3-liter engine. Oddly enough, the best thing it does is cruise down the freeway, where the engine hums along relatively quietly and responds quickly with the little bursts of acceleration you need to keep pace with traffic. The four-cylinder Explorer also is not bad in stop-and-go traffic, where it can get out of its own way, no matter what you might think. 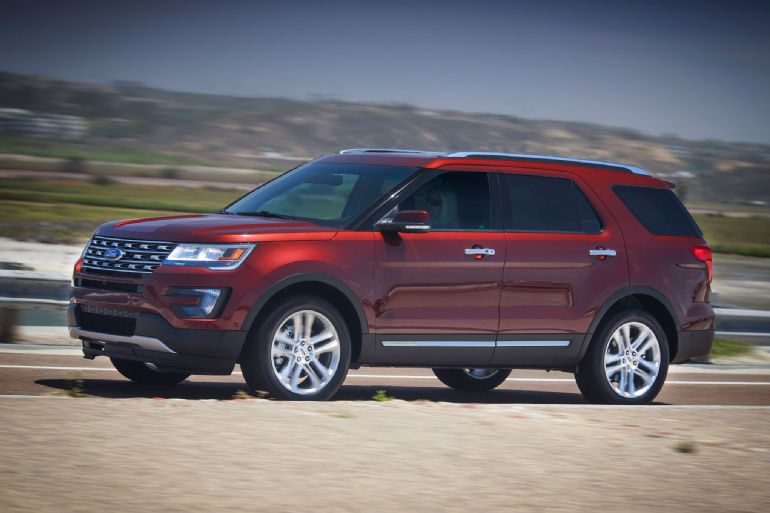 But when you’re driving the Explorer with its turbo-four on one of those winding roads that lead to the campground, lake, or trailhead, this engine struggles a bit, caught between relatively high rpm peaks for power and torque and only six speeds to get there. It’s in situations like this that you’ll be most aware of the turbo-four’s character as it revs aggressively, much as you’d expect. Of course, you’ll also be aware of the engine’s character at the fuel pump, where its fuel efficiency comes into play. So you should make your engine choice based on the places you visit most frequently: trailheads or gas stations.

Need a little help? No matter where you drive, the 2016 Explorer is ready to help out. It’s like traveling with a friend who has been there before and has packed climbing ropes, pitons, and energy bars while you have brought along only a spare T-shirt and some potato chips. 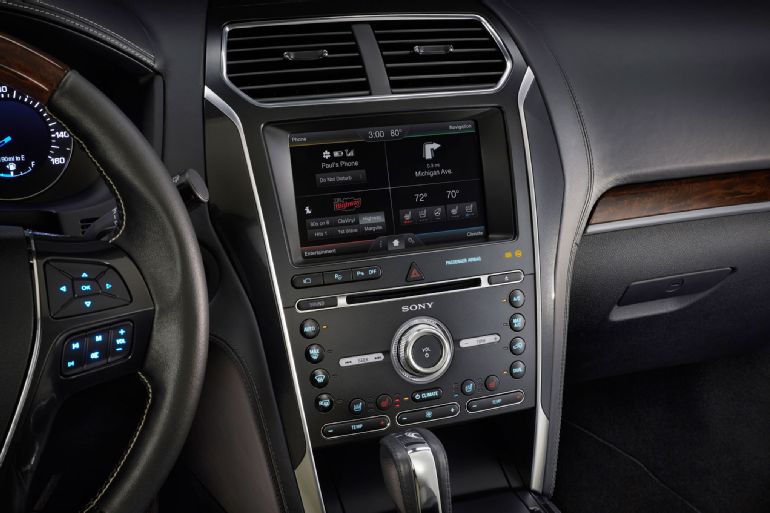 Now you can trigger the electronically operated hatch just by wiggling your foot beneath a sensor under the rear bumper, and the same electronically deployed third-row seat as before complements this little miracle. (Any three-row SUV without these three features is just pretending to have cargo-carrying utility.) And as before, the second-row seat slides back and forth, plus reclines. The rear seat now has access to two USB ports, and these outlets plus the one in the front seat incorporate Ford’s new smart-charging capability that tailors output to the electronic device you’re using. And every trim level for the 2016 Explorer now has inflatable seat belts for the outboard seating positions in the second row.

All the right active safety technology also continues to be a part of the Explorer’s mission statement. Automatic high-beam engagement, adaptive cruise control, lane-keeping assistance, blind-spot warning, parking sensors, and rear cross-traffic alert are still on the menu. New for 2016 are 180-degree viewpoint cameras both front and rear, and both have washers to keep the view clear in all kinds of weather. 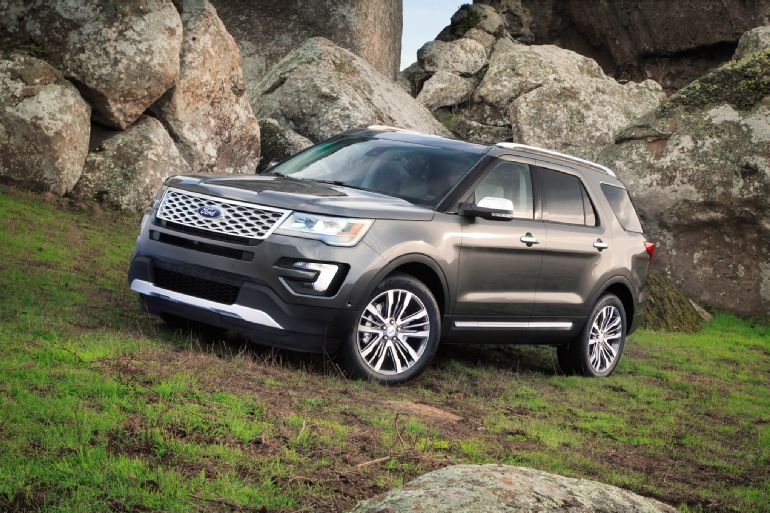 The people come last Strangely enough, the simple act of people moving is the activity that the 2016 Ford Explorer finds most difficult. To begin with, the high front cowl obstructs the vision of the driver in a very noticeable way, and this goes for taller drivers, not just short ones. Then there are the very short bottom cushions for the front seats, which don’t provide comfortable leg support, much less a feeling of security. The interior also looks bland and unrefined in all but the Platinum trim. And the otherwise-compliant independent suspension of this platform (shared with the Ford Flex) is still troubled by harshness from the Explorer’s selection of tires.

When the 2016 Ford Explorer goes on sale this summer with base prices that range from $30,700 to $52,600, the 7 million people who have owned a Ford Explorer since the model was introduced for 1991 no doubt should be happy. They will deeply appreciate the way that the functional character of their favorite SUV has been preserved, especially in an era when fuel economy and safety are now as important as the ability to tow a boat. Even so, we can’t help feeling that even an SUV enthusiast wouldn’t mind being as comfortable as a soccer mom in a crossover, and this is the option that’s still missing from the 2016 Explorer’s vast catalog of functional features. 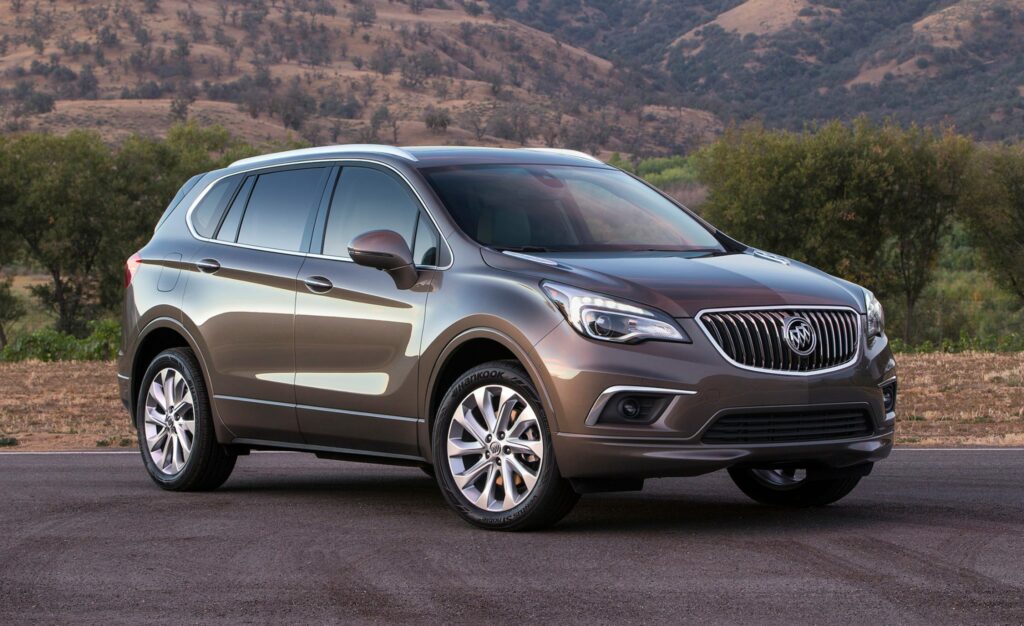 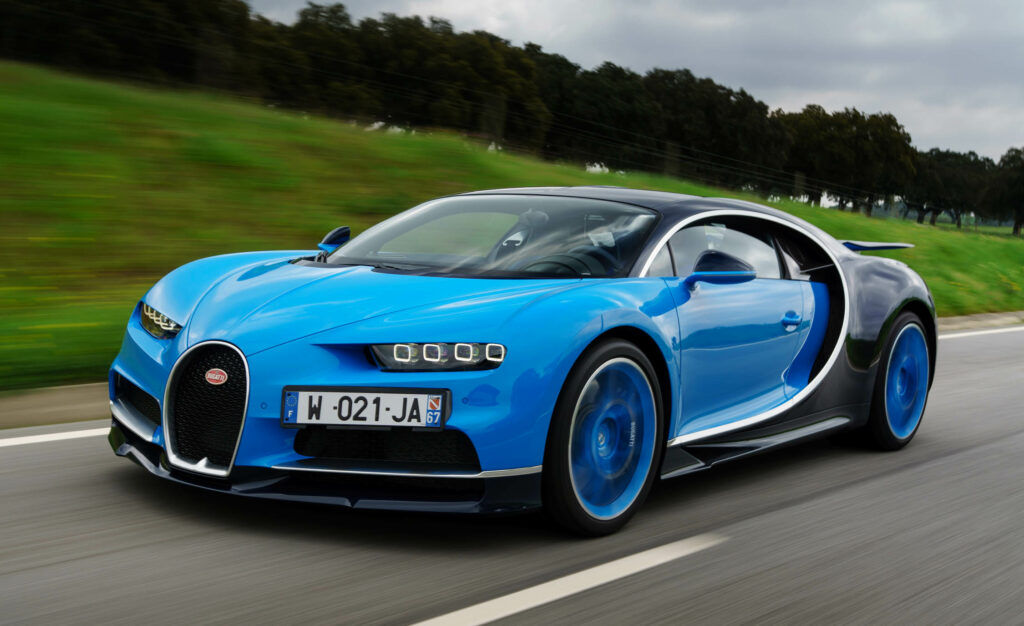