PAMPLONA, Spain — Jaguar may be owned by Indians and built by Brits, but most of those who call the shots at the company hold German passports. Almost the entire top management comes courtesy of BMW in Munich, and this still shows in the way the new vehicles handle, ride, and hold the road. The 2016 Jaguar XF is a driver’s car.

The key to the XF’s vigor is its aluminum-intensive body, shared with the new XE. The old Jaguar XF was no slouch, but it made do with very old bones that dated back to the old S-Type. The 2016 model loses some 265 pounds over the last model and, just as important, is 28 percent stiffer. Tactile and composed, it carves through bends at ambitious speeds, always on the alert and rarely caught out. 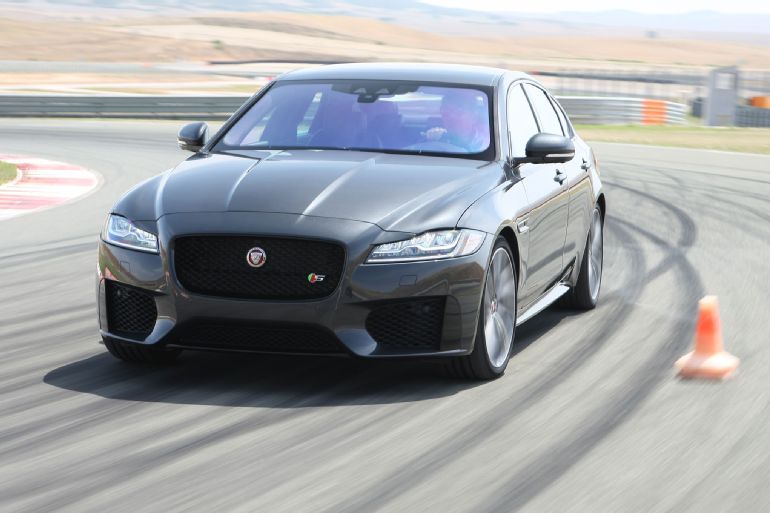 Unfortunately, the heart is a bit old. The 2016 Jaguar XF will launch in the U.S. with only a 3.0-liter supercharged V-6 rated at 340 hp or 380 hp, depending on whether you get the base or XF S variant. Performance is brisk: 0 to 60 mph in as little as 5.0 seconds for the XF S AWD (5.1 for the RWD model). But both the refinement and the expected fuel economy fall short of the best turbocharged sixes. Jaguar’s new Ingenium engine family should be ready by next year, at which point we can expect to see a new turbocharged inline four. New V-8s based on the same design should also eventually join the stable.

We start our day at the Circuito de Navarra. It’s a splendid track but, on this particular day, it’s hot enough to fry an egg. Our test car, an XF S AWD, isn’t happy out here. The automatic transmission responds too slowly to kick down orders, and the all-wheel-drive XF-S we were driving liked to chew its front tires. To add insult to injury, the air-conditioning packed up after two laps, and a couple of laps later the driveline switched to limp-home mode. 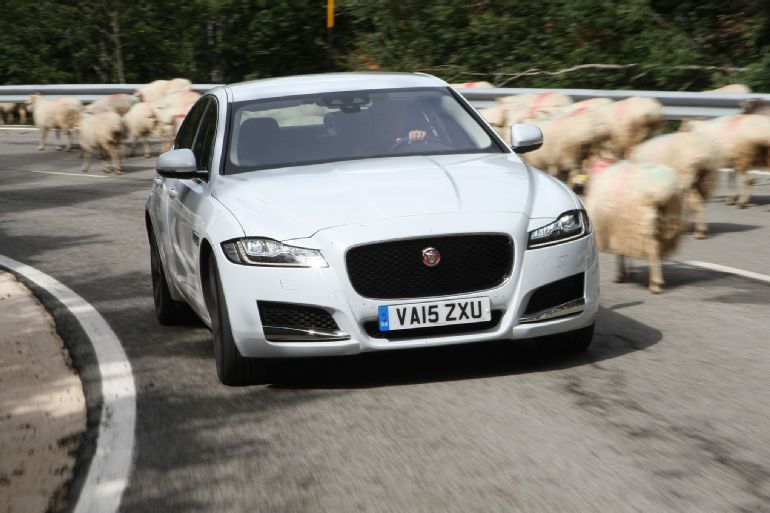 The XF feels far better on the winding mountain roads of the picturesque Basque country. Charging through a set of sweepers where certain rivals would roll or understeer too much, the Jaguar XF, particularly the rear-wheel-drive version, is capable and inspiring. Turn-in is eager and weighted just right, and steering feedback comes in carefully measured doses; changes of direction are free of this “let me help you” artificiality that ruins so many modern electrically assisted racks. Some drivers might not like such communicative steering, as it also telegraphs potholes, grooves, and ridges to your fingertips.

The other trade-off is ride quality, a traditional strength for Jaguar. Although the S-model features adaptive dampers, their settings seem to vary from taut to brittle. Could we please have more compliance in Comfort? The 20-inch footwear certainly doesn’t help. Neither is this car as isolated as one might expect of a large English sedan. Wind noise and road noise post clear acoustic warnings even before you venture into triple-digit territory, although the car feels planted as a Mercedes-Benz. 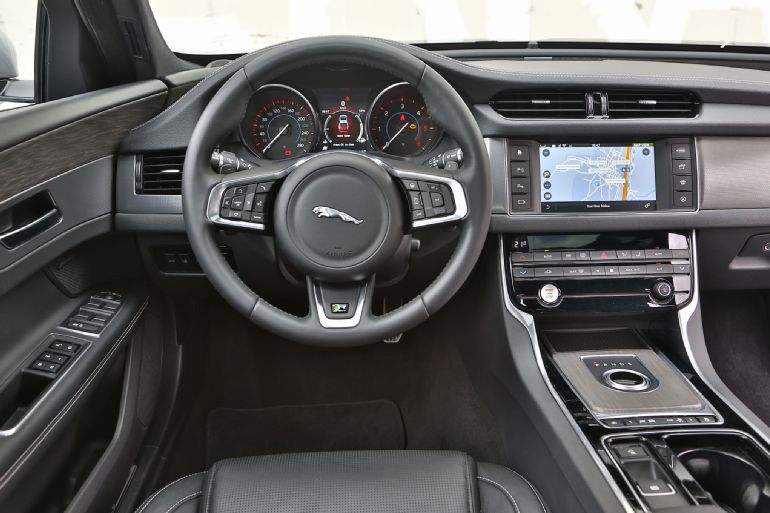 For budget reasons, smaller automakers often struggle to stay ahead of the wave of electronics features that are revolutionizing cars. But Jaguar has become a fast follower. The 2016 Jaguar XF still lacks the very latest wizardries like semi-autonomous driving, but all the essential assistance systems — like adaptive cruise control and a birds-eye camera view — are available. The touchscreen in the cabin is, at last, up to scratch and can be augmented by a head-up display.

Jaguar has never had any trouble upholstering a cabin, and the XF’s is again second to none. There are 11 types of cabin decor and five grades of leather. That’s matched on the outside by 17 paint colors and 11 choices for wheels. This should help the Jag stand apart from the crowd of BMW 5 Series and Audi A6s, even if the overall design is conservative. 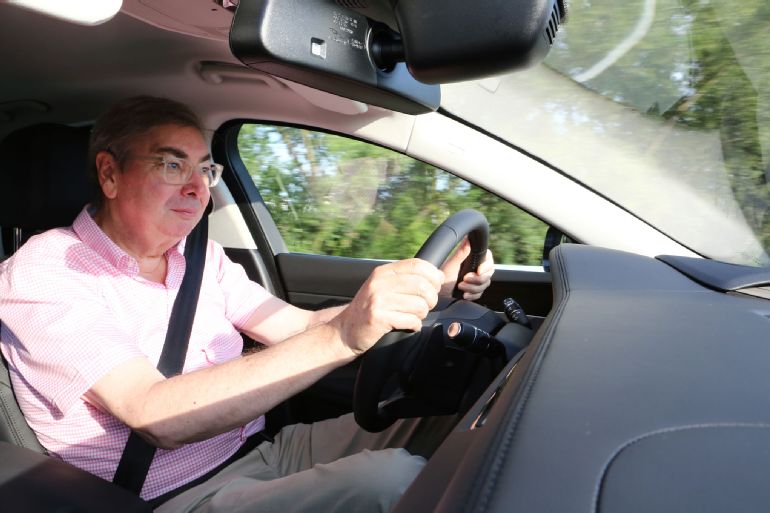 8In fact, the 2016 Jaguar XF shouldn’t have any trouble standing out by any measure. It’s more of a driver’s car than the current 5 Series, more stylish than the E-Class, and more prestigious than the A6.

The bad news for Jaguar is that all three German sedans are due to be replaced within the next 12 months, and they will fully expose the XF’s aged V-6s and less-than-stellar ride — those Ingenium engines better not be delayed. But in a segment that is creeping toward dullness, the fun-to-drive 2016 Jaguar XF should carve itself a slice of the market — the slice that, like Jaguar management, used to be loyal to BMW. 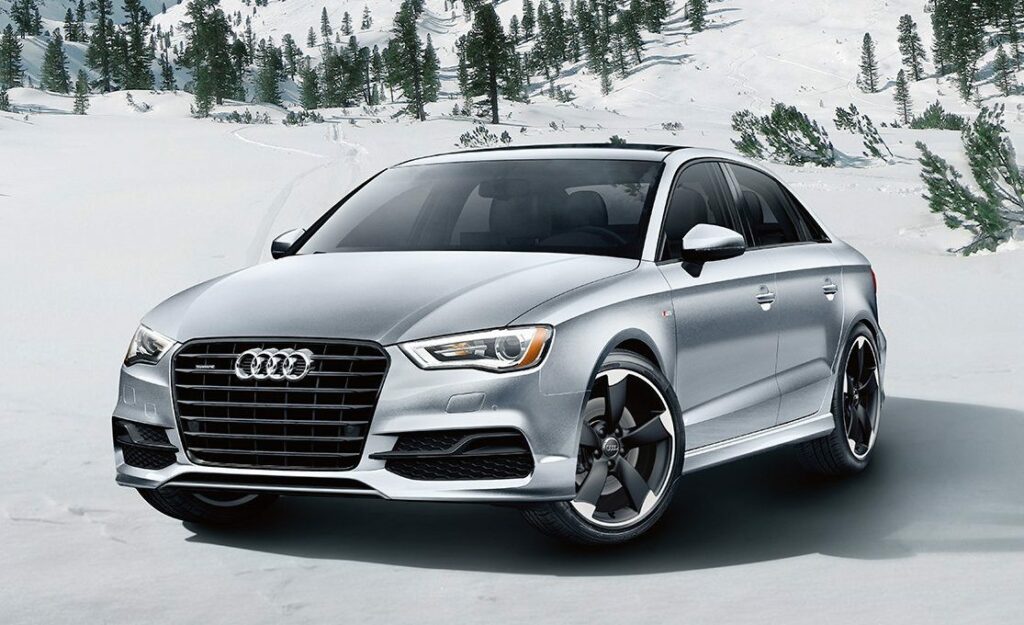 It Begins: Audi Kicks Off Year-End Car-Sales Frenzy with Special-Edition A4 and A3 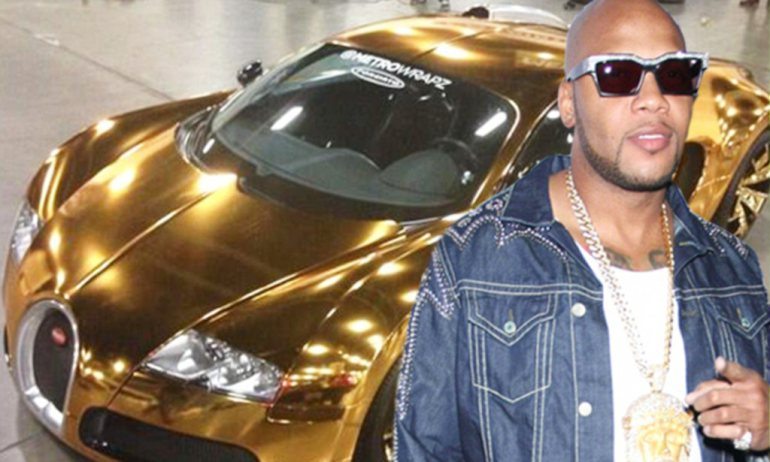