MADRID, Spain — Before I get to the 2016 Lexus GS F, indulge me: We were stopped at a red light. A woman on a Harley-Davidson pulled up next to us. My wife said, “Why are the handlebars vibrating like that? The whole bike is vibrating. Is it old? Broken? Or what?”

No, it was maybe two years old, and operating like a proper Harley-Davidson. Indeed, the woman’s arms were shaking like she was getting an electric shock every second or two. 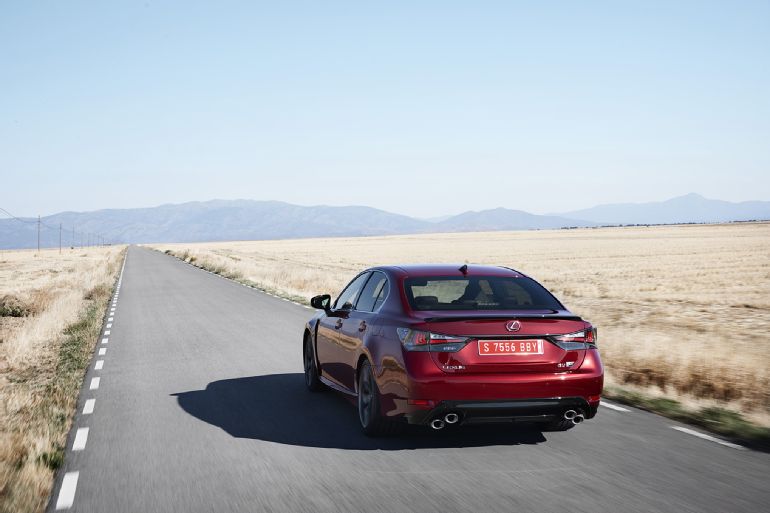 The idea, I told my wife, was that a Harley was slightly untamed, wild, and you were controlling a badass beast, even if it’s a two-year old Sportster 883 with horsepower so modest Harley’s web site declines to mention it (46.7).

Which brings us to a conversation I’ve always imaged must have happened in Japan, probably at Yamaha, probably about 1979, when the Yamaha marketing staff brought a Harley to show the designers and engineers, probably in Hamamatsu. I can imagine the engineers looking at the V-twin engine and frowning; there are more efficient designs. And once the Harley started, and sat there vibrating, I can imagine an engineer saying, “We can fix that!” 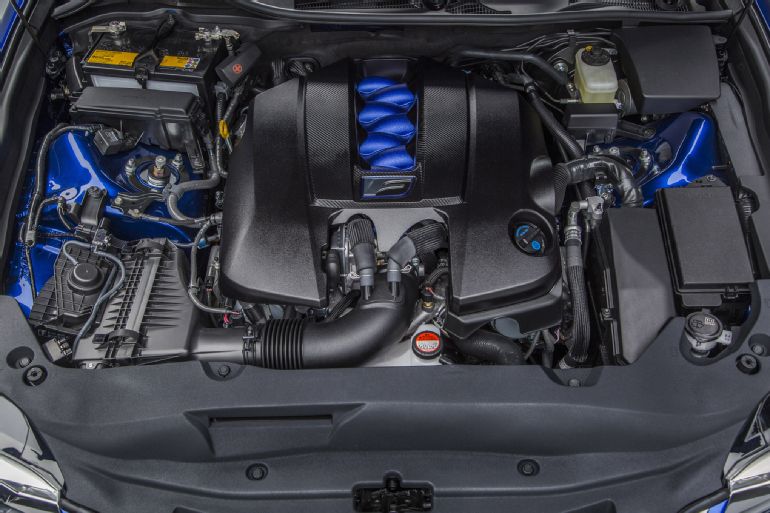 And some marketing guy trying to explain that no, the vibration and rough idle are valuable selling points. And I can imagine the engineers and designers nodding and smiling politely, while thinking, “What the hell?”

So Yamaha built the Virago V-twin, and sold a lot of them. I stood in a Yamaha showroom in 1982 deciding between a Virago and an XS650 Heritage, the Triumph clone that didn’t leak oil. I bought the Heritage. Still have it. Shakes like a wet dog, but doesn’t leak. 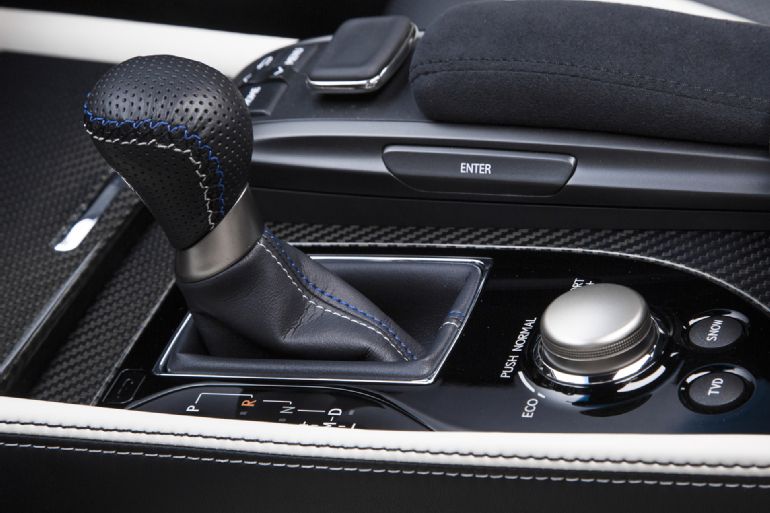 I mention this to point out that Japan still doesn’t quite get American enthusiasts. While other manufacturers use systems similar to Lexus’ Active Sound Control, Lexus seems to have really embraced the idea of using audio speakers to pipe electronically-enhanced exhaust noise into the cockpit.

In the 2016 Lexus GS F, a delightful if slightly sterile car, the electronic exhaust note at full song enhances the sterility more than the invigorating driving experience. But to Japanese engineers, it no doubt seems like the perfect solution for Americans who, for some inexplicable reason, want more noise, not less. And vibrating Harleys. 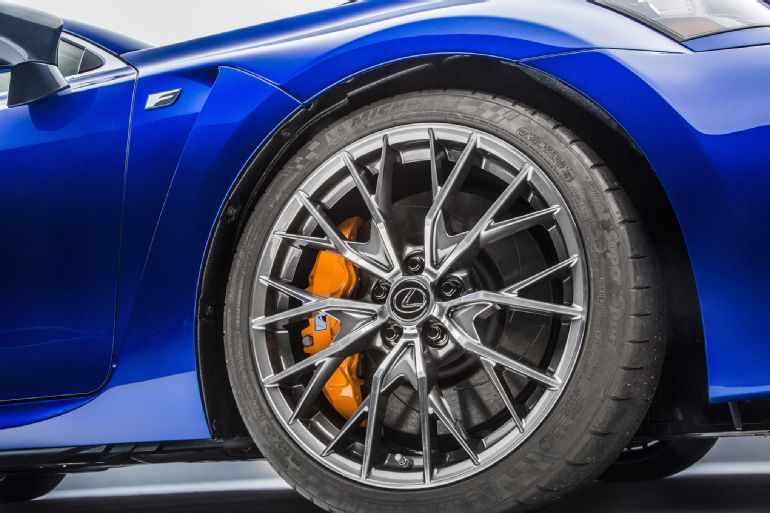 In one of the two “sport” modes, ASC uses dedicated speakers mounted in the front and rear. The front speaker “emphasizes the high tone of the air intake,” while the rear speaker “delivers a strong low-frequency sound, emphasizing the exhaust note.” In the more aggressive of the sport modes, “a special high-pitch wave known as SHT (Super High Tones) helps create a more stimulating sound at 7,000 rpm.”

Whether you consider all this Lexus’s commendable attention to detail, or just technical overkill, would likely suggest how you feel about the GS F in general. 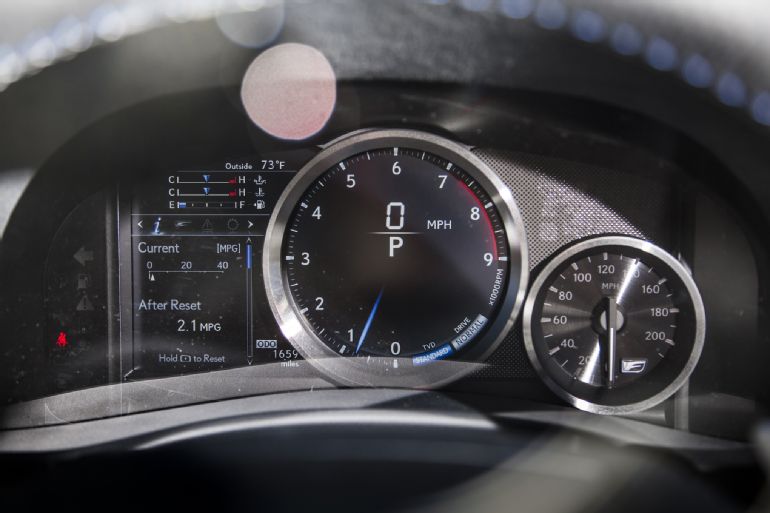 Lexus’ first F model, the IS F, debuted in 2008. It had a 5.0-liter, 416-horsepower V-8, with a then-remarkable eight-speed transmission. Eight years later, the one-line summary of the 2016 Lexus GS F remains right in line with that original IS F: A bigger, five-passenger sedan, powered by a 5.0-liter, 467-horsepower V-8.

The IS F was aimed squarely at the BMW M3, and on paper, hit the mark. Reviewers lamented the fact that the Lexus lacked the BMW’s “feel,” and it did: BMW has long led the field in building cars that connect the driver to the road. 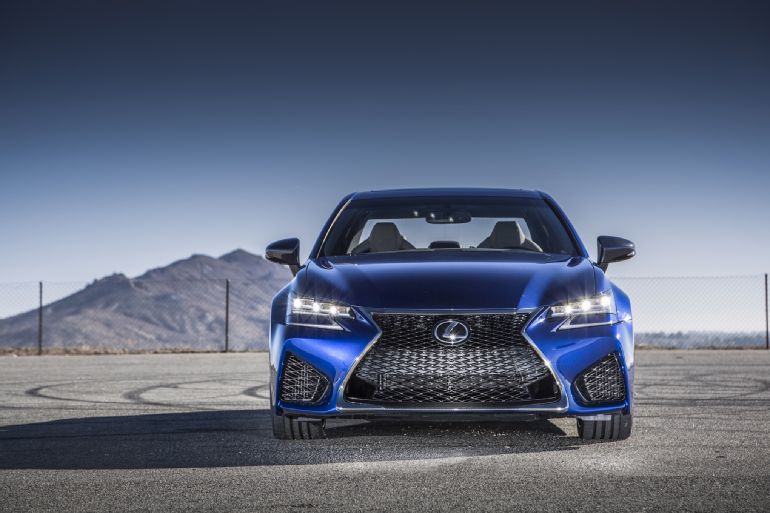 Now, three F models later — second was the LFA, third the RC F — Lexus has closed that gap. We drove the GS F in and around Madrid, Spain, including a stint on the semi-historic Jarama circuit, which hosted eight Formula 1 races up through 1981, when it was correctly deemed too narrow with insufficient runoff, and no real room to expand.

In town, and on two-lane roads in the country, the GS F shines. While 467 horses may not be the most powerful engine in the executive-class performance sedan market, it’s plenty for the perceptive, quick-shifting eight-speed Sport Direct Shift automatic to work with. At 4,034 lbs, the GS F isn’t a lightweight, but it’s surprisingly light on its feet. 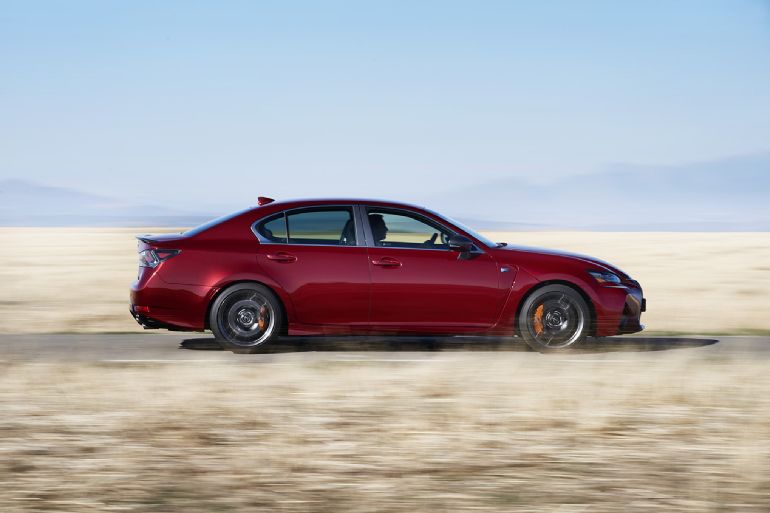 Much of that has to do with the nicely tuned suspension, double wishbones up front and multilink in the rear, riding on Michelin Pilot Super Sport radials, 255/35-ZR19 on forged aluminum BBS wheels in the front, and 275/35-ZR19s in the back. Nothing here advances the science of suspension, but everything works well in every situation.

Brakes are exceptional: Brembos, 15-inch, six-piston discs in the front, and 13.6-inch four-piston discs in the rear. They are linear all the way from slow-poking around town to repeated use at the end of Jarama’s longest straight, with no signs of fading. 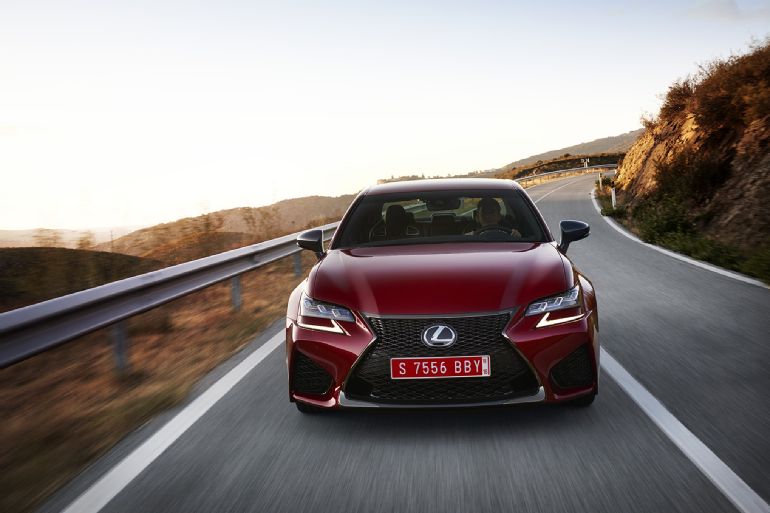 Lexus claims a 0 to 60 mph time of 4.5 seconds, identical to our own stopwatch tests. The quarter-mile passes in 12.8 seconds, and top speed is electronically limited to 168 mph. EPA-rated mileage is 16 mpg city, 24 mpg highway, with a 19 mpg average, 91 octane recommended.

Outside, you’ll find a modest carbon fiber rear spoiler, and up front, brake ducts sort of hidden in the grille, next to large, and rather vulnerable, openings for an oil cooler on one side, and transmission cooler on the other. The car looks good in any of the eight colors, but the headline hue is “Molten Pearl,” a downright luminous copper shared with the RC F. We liked it, but collectively wondered if we’d like to get up every morning for five years and be greeted with Molten Pearl in the driveway. Plus it sort of defeats the opportunity to operate a fast car in stealth mode. 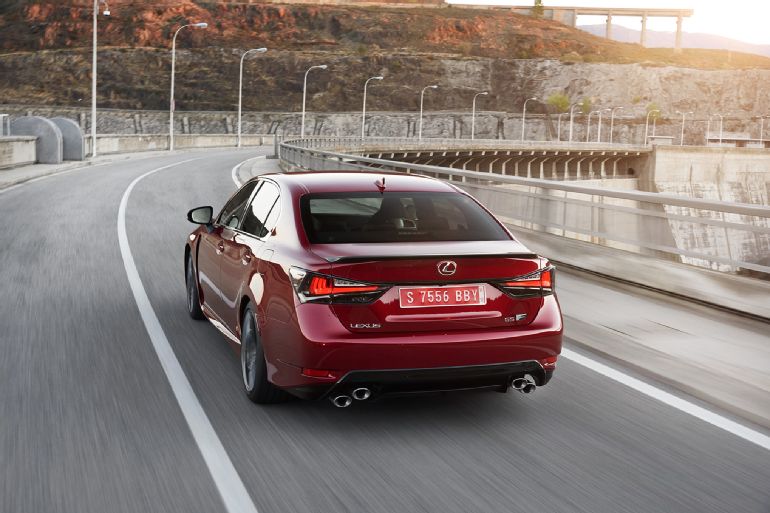 Lexus likes it so well that if you check the option box for painted brake calipers, you get Molten Pearl, which looks kick-ass on the Molten Pearl cars, sort of odd on Ultrasonic Blue Mica models. Those painted calipers, and the 835-watt, 17-speaker Mark Levinson sound system, are the only options, aside from what your local dealer can bolt, stick, or spray onto your car. The standard sound system has 12 speakers and 299 watts. Anything else you’d want is already standard, in keeping with the continuing shrinkage of the Toyota-Lexus-Scion option sheets.

Trunk space, at 14 cubic feet, is plenty adequate, but the opening is a little small. Inside, the front bucket seats are quite good, supportive in every area. They have a pair of openings beneath the headrest that look like holes for a four-point harness, but they have a plastic grille inside that you’d have to punch out.

In the back, seating is very comfortable for a pair of six-footers, and enough room for a fifth passenger to not feel claustrophobic. No complaint with instruments or controls — Lexus figured that out a long time ago. In fact, with the 1990 Lexus LS 400. Want to know about safety stuff? Didn’t think so. It’s all there, 10 airbags, yada yada yada.

On the racetrack, the GS F is more at home than any Lexus sedan that precedes it. The engine pulls hard right up to the 7,300 rpm redline, which you visit often given the fact that maximum horsepower comes at a surprisingly high 7,100 rpm. The 5.0-liter engine has direct injection which enables a high 12.3:1 compression ratio, and exhaust backpressure has decreased since we first saw this powerplant. In more conservative driving, it’s able to shift seamlessly between Otto and the more economical Atkinson cycle. 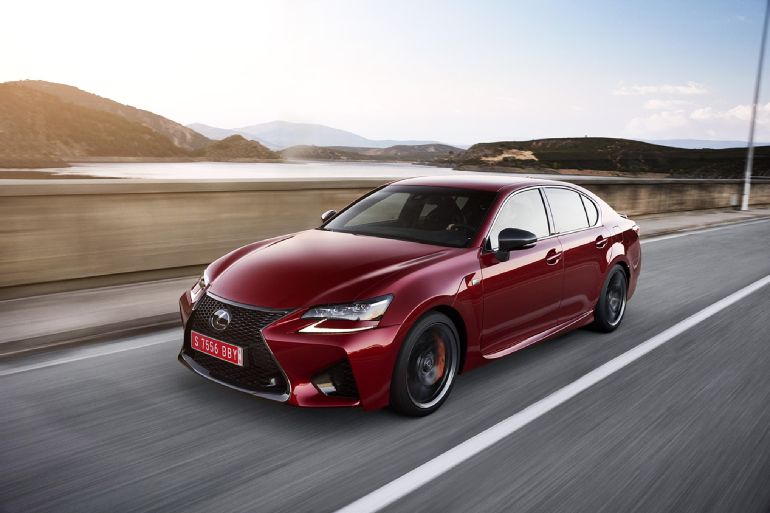 The transmission is quite good on track, with the paddle shifters mounted on the steering wheel, not on the steering column. Driving modes are Normal, Eco, Sport S and Sport S+. You’ll want Sport S+. Sport S maximizes powertrain performance, while Sport+ adjusts the feel of the already-communicative electric power steering. Sport+ will also drop the redline from the usual 7,300 rpm to as low as 3,700 rpm, based on coolant temperature, thus preventing cooking your engine when you are too busy to look at the gauges. Every mode has its own dashboard configuration.

There’s also a torque-vectoring differential that transfers torque to the rear wheel most able to make use of it while cornering. It has three settings: You’ll want Track.

And finally, the menu of electronic choices includes the Vehicle Dynamic Integrated Management system, which convenes ABS, traction control and stability control. Choosing the Sport setting puts all these nannies to work for you. Choosing Expert turns off traction control. That makes for better photographs, but unless your name is Lewis Fernando Vettel, Sport makes for better lap times. The traction control in that mode sits quietly until you are about to make an expensive mistake, then it rescues your ass.

Speaking of expensive: The GS F will list for $84,440, plus $940 destination. Lexus hasn’t priced the Mark Levinson sound system or the painted calipers options, but we’d guess about $3,000 for the sound, half that for the colored calipers. All this is in the ballpark, or a little less, than the central competition.

26Yes, there’s no question that the 2016 Lexus GS F is so technically advanced that you have a right to fear a complete absence of the I’m-in-control-not-the-computer feel of the BMW M5 or, to a lesser degree, the Audi S6. But this is the closest Lexus has come yet to building a Japanese BMW, and that’s a compliment. There are lots of ways to spend $85,000, and we wouldn’t try to discourage anybody from spending it on one of the 2,000 or so 2016 Lexus GS F that should be at a Dealer Near You by December.

And as for that synthesized exhaust note: Sure, it’s cool, but we’d rather just roll down the windows and listen to the real thing. 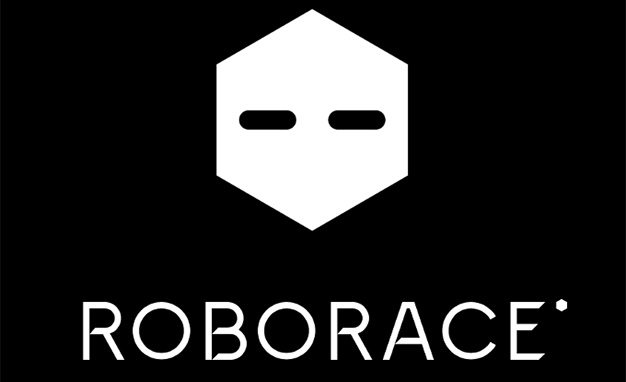