If there’s any doubt about the Bugatti Chiron’s raison d’être, it’s written right on the steering wheel, on a large blue button emblazoned with one word: ENGINE. Sure, we could wax poetic about the marriage of modern technology to the ancient human craving to express vanity and wealth. Or about how the 1500-hp Chiron is metaphorically the 700-room Château de Versailles with tailpipes, how the $3 million price means it is no crazier than hiring an artist to spend four years painting God and Adam and angels and saints on your chapel ceiling. In other words, we could go on and on about how it is an exuberant, untethered overstatement in the service of generating delirious stupefaction, both in the nobles who luxuriate in it and the peasants who revel in its reflected glory.
All Ate Up with Motor
But the new 261-mph Bug is really just about being all ate up with motor. It’s about old-fashioned combustion in 16 furnaces amidships that are blown into a furious conflagration by quad turbo fans. Push that ENGINE button and the 8.0-liter W-16 lights, not with the ear-bending bark of an Italian supercar—Bugatti figures it is above those kinds of bad-boy theatrics—but with the manly burble of a lazy 650-rpm idle. To paraphrase Theodore Roosevelt, “Speak softly and carry a suitcase nuke.” 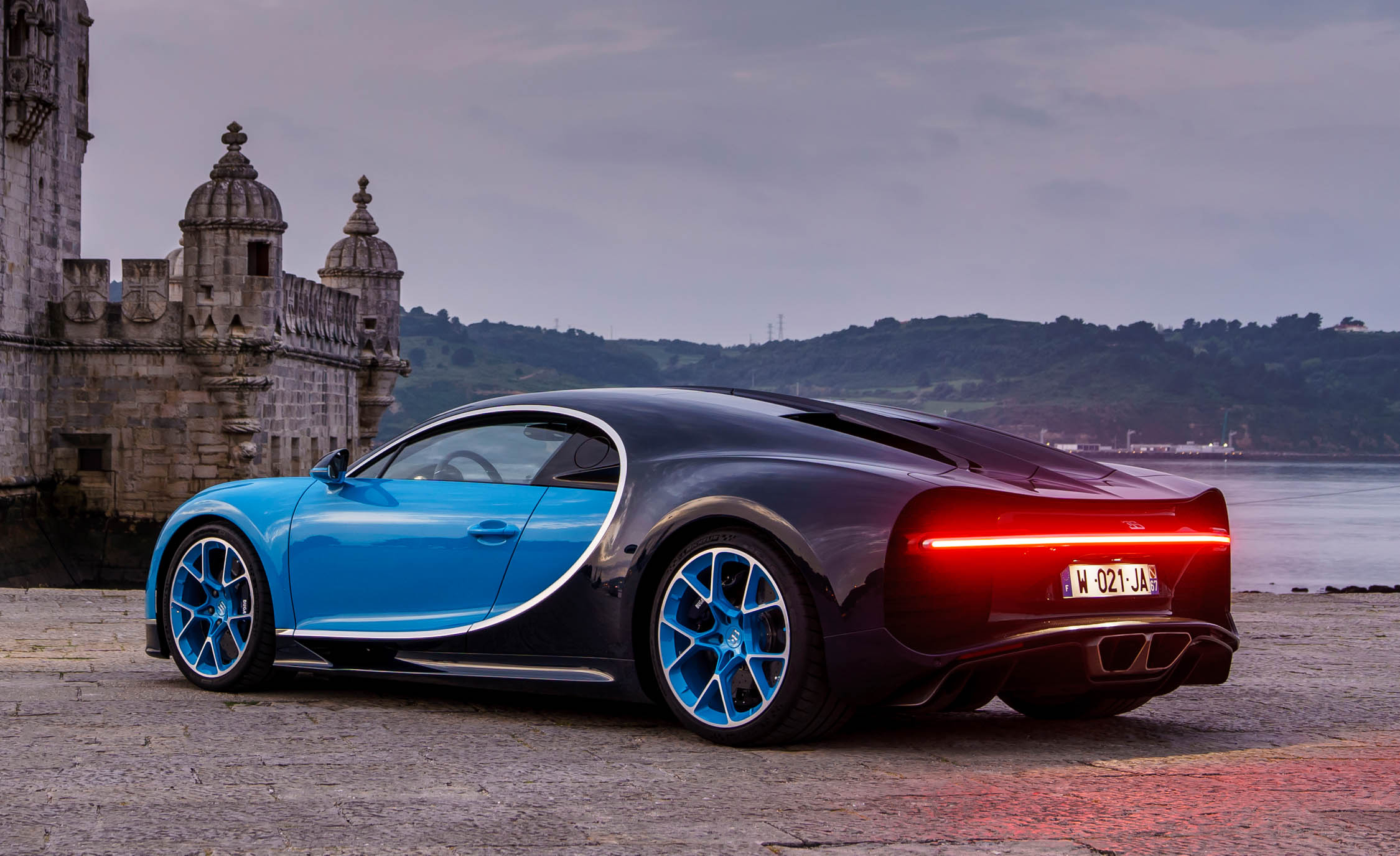 To be brutally cynical—for that’s the last refuge of plebeians who cannot now and never will be able to afford a Chiron—this car is a do over. It’s a reboot of a last-decade idea for reviving a slumbering auto boutique with a moonshot engineering project intended to create shock and awe. The 1001-hp Veyron 16.4 was the busted sound barrier, the Everest summit, the four-minute mile. It was the car that went 1 mph faster than a Peugeot P88—the fastest race car on the Mulsanne straight—just because. The benchmarks have all been bested, the hyperbole all belabored. It seems pointless to raise the bar again with another mid-engined two-seat coupe, like enrolling Superman in a CrossFit class in the hopes of widening the gap over those speeding bullets.

Viewed more charitably, the concept was perhaps not fully tapped. The Veyron may have improved greatly during its 10-year, 450-car slow drip of a production run, but its handling never rose above that of a blindingly fast Lexus. Unlike a Lexus, it was loud inside, and not a good kind of loud but a loud borne of thrumming tires and ticking injectors and whirring accessories and those great sucking bazookas behind your head. And its slightly corpulent styling was perhaps a shade too Moulin Rouge for some and not enough Yves Montand with a cocked cigarette and a piercing squint. It was an awesome thing, the Veyron, but not above a sequel. Shock and awe is highly perishable, and engineers always need new challenges.

Over some squid nibbles and other Portuguese delicacies at a Lisbon bistro near the Tagus River, I am assured that the Chiron was indeed a worthy challenge. At first, explains chassis-development head Jachin Schwalbe, the thinking was just to restyle the Veyron and crank up the boost. But everybody soon realized that going from 1200 horsepower in the hottest Veyrons—the Super Sport and the Grand Sport Vitesse—to a still drivable 1500 in the Chiron required more than just a bigger blow. Eventually, nearly every single part number changed in the engine. And in the seven-speed transmission. And in the two clutches. And the wheels, tires, brakes, and self-adjusting suspension. And the body, aerodynamic devices, and interior. Even the hand-painted, solid-silver Bugatti grille badge got a facelift. 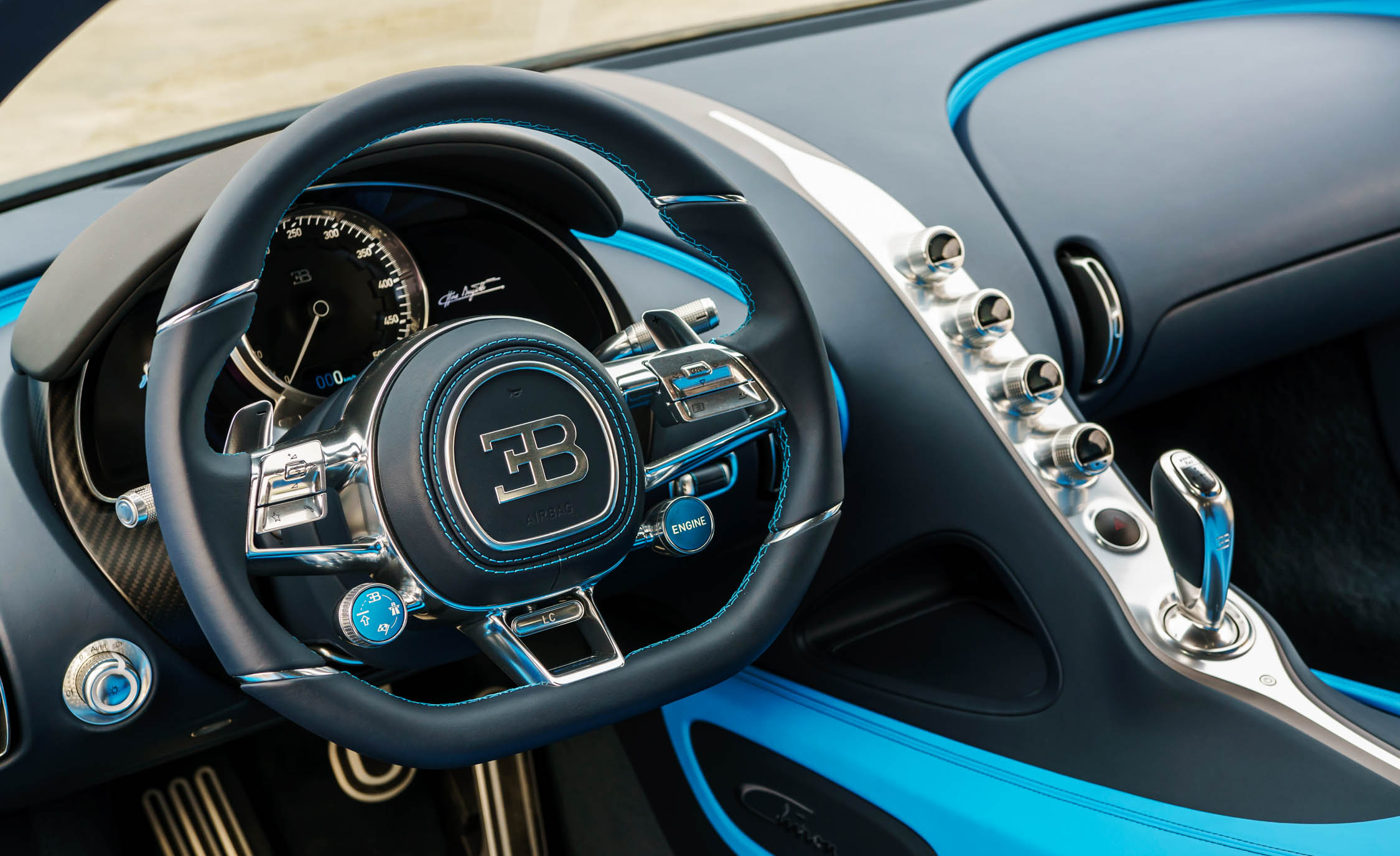 Let’s Open ’Er Up
The next morning I’m paired up with Le Mans winner and sports-prototype veteran Andy Wallace for a blast through the rolling inland districts of rural Portugal. I once set a personal record of 204 mph in a Veyron Super Sport in Spain, but I’m warned that Portugal is cracking down, with speed cameras and biker fuzz who are happy to follow you to the nearest ATM for on-the-spot collection. Still, Wallace and I will see an indicated 197 mph before the sun has set and, luckily, not one cop.

The relatively few people who have driven a Veyron will notice at once that the Chiron is quieter inside and that it has a gentler ride. The strange Michelin PAX tires that cost five figures to replace, with new wheels required at the third tire change, are gone, superseded (at customer pleading—even the obscenely rich have their limits) by more conventional Bugatti-spec Michelin Pilot Sport Cup 2s, size 285/30R-20 in front and 355/25R-21 in back. There is less road roar from these massive drums and less unpleasant noise from the engine. You hear the husky swell from the enormous titanium exhaust, unaided by artificial augmentation, plus the rapid cymbal riff of the turbos snuffling air at a rate measured in blimps per second.

In the European way, Bugatti quotes an acceleration figure in the zero-to-62-mph metric, stating that it’s “less than 2.5 seconds,” which is good because the first Veyron we tested hit 60 mph in 2.5. But as Schwalbe and his colleagues are quick to point out, at these torque levels, it’s almost entirely dependent on traction. And this is not the same world in which the Veyron debuted. Today, common Porsche 911 Turbos handily pull a 2.6, and Tesla P100Ds in Ludicrous mode are quicker still.

So the Chiron’s horizon-sucking acceleration, while still evoking a sport bike with four wheels, is not quite as dumbfounding as the Veyron’s was in its day. At least, not from zero to 60. From 60 to, oh, say 180 mph, which takes about 10 seconds, the car actually seems to accelerate even harder, pretty much flattening your lungs and causing both the pleasure and fear centers of your brain to go code red simultaneously.

You can experience this electrifying sensation repeatedly using launch control, activated by pressing a large button just below the airbag on the steering wheel, then applying firm, simultaneous pressure on the brake pedal and the accelerator. Act quickly, though, as you have just three seconds to release the brake or the LC will shut off. The torque on all four wheels is so immense that even on dry pavement the car will wiggle a bit as it claws for traction. After 50 feet or so it hooks up completely, and the scenery will flatten and blur.

The Chiron is improved in so many other ways as well. The throttle, able to summon a bonkers 1180 lb-ft of torque, answers with the slimmest delay in lag, meaning on country lanes you’ll often bawl-whoosh past dawdlers so quickly that you’ll be several dozen car lengths ahead before it occurs to you to pull back into your lane. If roads were striped with the Chiron in mind, the Tail of the Dragon would be one big passing zone.

The steering now lives and breathes, the ratio having dropped from 18.0:1 in the Veyron to 16.4:1, and the rack communicates with your palms. The chassis sniffs the pavement a little, occasionally following the changing camber and feeling altogether more organic. Deciding on an appropriately ridiculous cornering speed was such guesswork in the Veyron; in the Chiron it’s second nature even as speeds remain ridiculous. And when you need to arrest all this motion, the AP Racing brake calipers and Brembo carbon-ceramic rotors display a delicate progression belying their enormous size.

The Art of an Art Object
Perhaps Louis Chiron’s biggest achievement was being the oldest driver (55) ever to compete in a Grand Prix. The big C that defines the Chiron’s side profile, as well as the spinal ridge and the extravagant sweep of LED accent lighting that cleaves the cockpit, is either a tribute to his name, to the rather expansive way Ettore Bugatti rendered the E in his personal signature, or to the Type 57SC Atlantic. The company leaves it up to you to decide, but the Chiron is an altogether more purposeful shape, the horseshoe grille pushed forward into the wind to initiate a sleeker and somewhat tenser profile. The eight LED headlights, which illuminate sequentially inward on startup, and the 82-LED taillight blade are riveting elements, the latter housed in a thin scythe milled from a 441-pound block of aluminum.

As in the Veyron, the cockpit exudes artful minimalism, but the Chiron takes it even further. The center stack looks like the four fingers of a metal sea anemone, the tips of which are digital readouts that can tell you everything from the oil temperature to the max speed achieved and the horsepower tapped on the current trip. 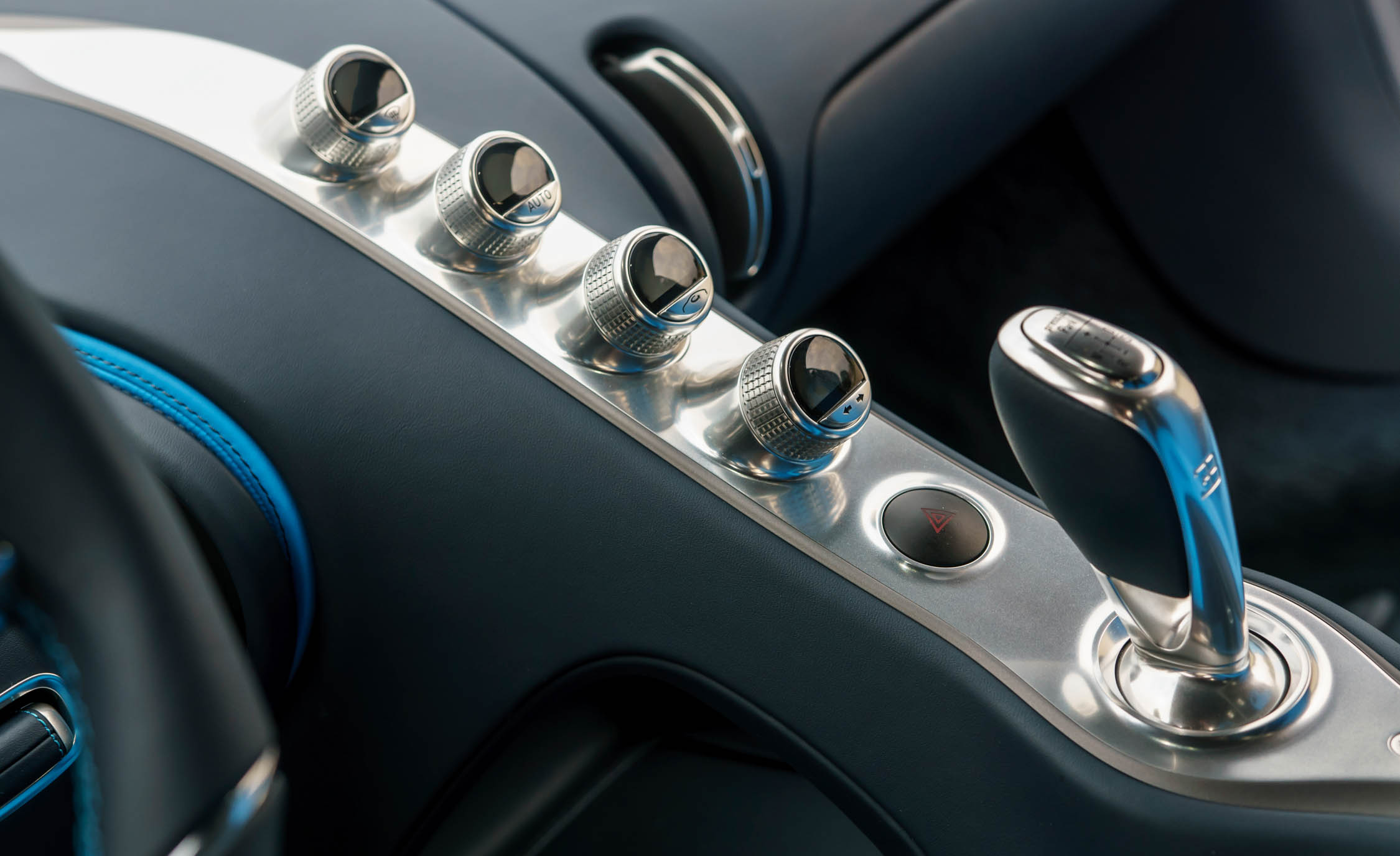 Design director Etienne Salomé, a Parisian in exquisitely tailored blue silk who is as Bugatti as Bugatti gets, explained that he didn’t want an all-TFT instrument cluster that is just a dark hole when the car is off. “When a Chiron goes to Pebble Beach in 50 years and children look in the window, I want them to see something,” he said, referring to the large analog speedometer in the center of two color screens that, when on, present car and trip data (it said we averaged 20 mpg) plus a navigation map. There is no plastic anywhere in the cockpit, we are told. If it looks like metal, it is metal. If it looks like leather, it is one of the 16 hides that go into making each Chiron. One-carat diamonds support the speaker diaphragms in four tweeters.

In addition to a flat underbody tray with strategically placed air dams, plus a system of ducts and slats up front that create both a high-pressure zone in the wheels for cooling the brake rotors and a low-pressure air curtain around the front wheels to suck out the hot air, there are two moving aerodynamic elements. Underbody flaps forward of the front wheels adjust their pitch with the car’s speed to improve downforce, and the large wing in back rises on stilts, mightily obscuring the rearward vision whether it’s pitched up 3 degrees in Top Speed mode or 49 degrees in the air-brake position.

When you turn off the Chiron, the wing does an amusing little dance of reluctance, like a puppy unwilling to go back into the house, as it drops bit by bit back into the body. The engineers told me this slow shimmy is a warning, to keep people from getting their fingers crushed by a wing stout enough to generate 772 pounds of downforce at 236 mph.

Almost certainly the last of its kind as supercars give way to super-hybrids and super-electrics, the Chiron’s main selling point against other objets d’art from the likes of Pagani or Koenigsegg is that it hails from the Volkswagen Group, which built an average of 28,176 cars every day of last year. So this is art that is likely to start in 20-degree weather. Just imagine Michelangelo or, indeed, Ettore Bugatti, having 3D computer modeling, wind tunnels, and hundreds of talented artisans at his disposal. Would the result have been so different? 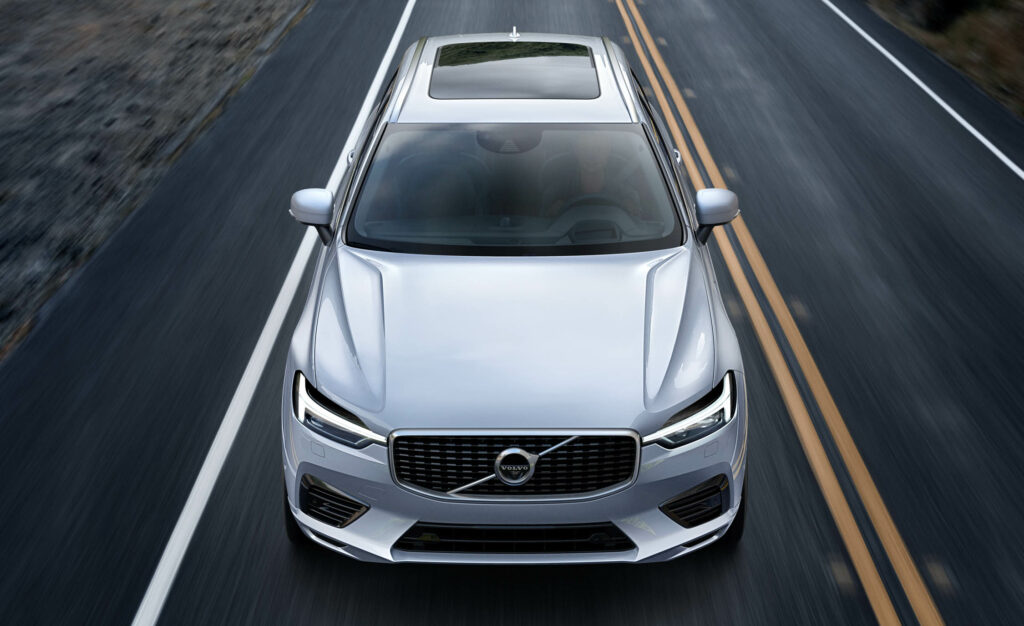 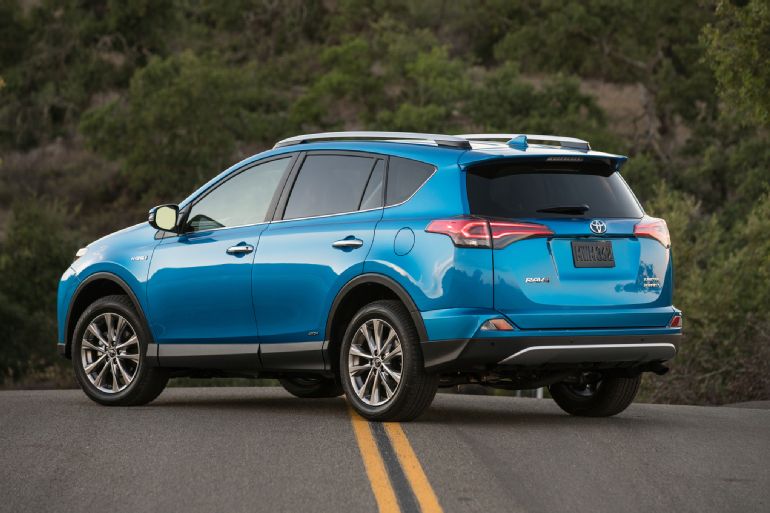