TENERIFE, Canary Islands—Whistle. Yes, that’s the subtle whir of whistle creeping into the cabin when you bury the throttle in the 2017 McLaren 570GT. Windows up, conversation rolling, no matter—those rapidly spinning twin turbines won’t be quieted, regardless of how insistently the British carmaker positions this latest Sport Series model as a kinder, gentler grand-touring sled for mild-mannered types.

After spending a day in the life of the 570GT, perhaps it’s easy to put too fine a point on the low volume, high-frequency pitch. But it speaks volumes to the 570GT’s reluctance to depart from its roots as a sharply honed tool for high-speed transport.

How so? Consider the evidence.

The new 570GT carries a base price of $198,950, a $14,050 premium over the 570S. The extra cash buys a handful of refinements over the sportier model: The GT gains a transparent roof, which merges with a restyled tail section that McLaren smoothed out to a flush expanse of glass and sheetmetal. Trading the buttresses and louvered engine compartment for a clean slope of glass enables 7.8 cubic feet of cargo space within the so-called Touring Deck (in addition to 5.3 cubic feet up front). For what it’s worth, the leather-lined trunk looks and feels premium (as does the cargo-bay door, which is constructed of crushed carbon fiber). But the mostly shallow space doesn’t allow for much stowage beyond a small bag or two.

Counteracting the rear decklid’s slippery aerodynamic effect is a small lip spoiler at the tail, and beneath the tiny trunk lies an insulated and quieted exhaust system, the same you’ll find in the lower output 540C model that is not available in the U.S. The interior gains standard Nappa leather trim, and the usual personalized paint and trim colors can be spec’d through the McLaren Special Operations division.

The 562 horsepower, 3.8-liter twin-turbo V-8 and dual-clutch 7-speed gearbox remain untouched, though the 570GT’s steering ratio is two percent slower than the 570S’s. Spring rates drop by 15 percent up front and 10 percent at the rear, and the Pirelli P-Zero rubber transmits less road noise—in all, light touches to McLaren’s focused sports car formula.

On the Road: Fierceness, Finessed 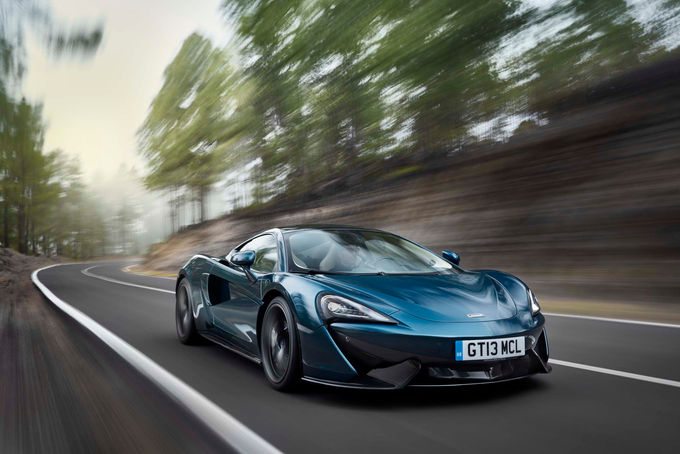 Though the McLaren 570GT tips the scales at 2,976 pounds—82 pounds heavier than the 570S—mashing the accelerator doesn’t make the difference particularly perceptible. The GT still goes like stink, stomping 0-60 mph in a claimed 3.3 seconds, two tenths pokier than the S (the McLaren’s all-wheel drive archrival, the Porsche 911 Turbo, does the deed in 2.8 clicks; the Audi R8 V10 plus pulls it off in 3.2). The sensation of sliding through the gears is one of lightfooted thrust and effortless eagerness, while the most aggressive Track setting retains the so-called Inertia Push feature. Inertia Push maximizes flywheel inertia to help torque transfer when the driver applies 60 percent or more throttle above 2,500 rpm.

Leaving the engine and transmission mapping untouched suggests they weren’t broke in the first place and don’t need fixin’. However, the epic crescendo of horsepower (which culminates in the needle pounding itself into a soft redline at the 8,500 rpm mark) feels more philosophically in line with an eager go-getter of a track car rather than the stately effortlessness of a grand tourer. Regardless, there’s ample torque throughout the powerband for more restrained modes of driving—a pragmatic but actually difficult-to-achieve approach considering the 570GT’s temptingly expansive bandwidth.

Peer out from the driver’s seat, and the same excellent view as the 570S greets the driver: the world passes through a wonderfully vertical windshield that enables exceptional downward visibility. The digital instrumentation alters layout according to drivetrain mode; sport offers a big round tach/small digital speedometer combination, and track shows a gentle arc of a tach needle, big redline countdown lights, and an even less prominent speedo. Unlike some virtual instrument panels, this one doesn’t disappoint: the cabin stays consistent with the car’s underlying theme of techy sophistication. 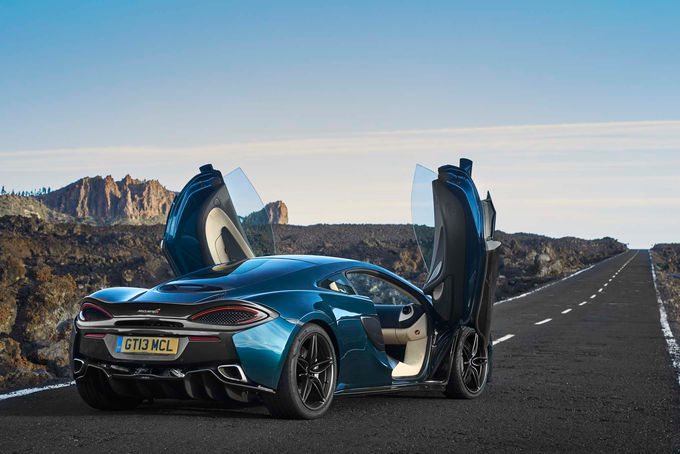 One of the cockpit’s defining features is the panoramic roof, which utilizes a “Sound and Solar Film” coating to kill decibels and absorb heat-causing ultraviolet rays. The glass uses the same 18 percent tint as the McLaren P1’s lid, though heliophobes will be relieved to learn McLaren is working on a portable, folding blind to block light, while McLaren Special Operations also has a photochromic option in the works. Our test drive revealed a perceptible amount of heat entering the cabin from the glass roof, which was compounded by an A/C unit that blew lukewarm air and wouldn’t switch off, presumably a pre-production flaw to be fixed.

Ride quality is noticeably smoother than with the 570S. Though the relaxed kinematics allow for more pitch and heave (we bottomed out on road ripples twice during spirited romps down the Mt. Teide Volcano, elevation 7,840 feet), the new settings don’t dramatically reduce the feeling of connectedness with the road—thanks in part to the stiff carbon Monocell II chassis and the lightly softened suspension. Despite the revised Pirellis, there’s still a bit more road noise transmitted into the cabin than you might expect for a dedicated grand tourer. However, generous corner grip and confidence-inspiring balance suggests McLaren biased the 570GT toward responsiveness, not softness. As with the 570S, switching to the new Dynamic mode (by holding ESC Off in Sport or Track) enables more playful power delivery and tail sliding.

The Sound of the Future

Lest you suspect McLaren lost its way by building an elegant, friendlier version of its lean and mean Sport Series, fear not: there are sufficiently strong strands of the donor car’s spirit to lend the 570GT a sense of familial integrity and glued-down performance. 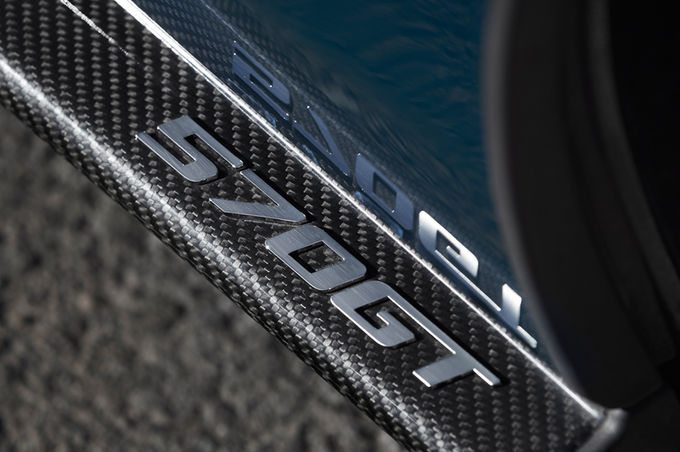 If anything, the 570GT begs a few questions: not that the 570S’s seats aren’t comfortable, but why not offer new seats for those seeking an even comfier perch? Why not tune the engine for greater low-end grunt? And is there room for further exploitation of this alien but alluring concept of a more accommodating McLaren?

The 570GT is likely to appeal to those easygoing souls who are less likely to get their kicks at a local track day, and speaks clearly to the brand’s desire to broaden its repertoire and attract a more diverse clientele. Can the 570 series follow in the footsteps of the Porsche 911, which spins off variants faster than a multi-billion dollar Hollywood action franchise? Should it? During a recent two-day drive from Woking to Geneva, we found the 570S surprisingly accommodating over the 600-plus mile journey.

There are invariably those who will be drawn to the 570GT’s Jaguar E-Type-like side-hinged rear hatch and its plusher, cleaner aesthetic. But there is likely an equally opposed tribe unable to justify a McLaren that inches incrementally away from its disciplined focus on weight loss and agility. Despite the inevitable naysayers, the 570GT succeeds at its mission because it upholds the brand’s philosophy of performance, successfully avoiding the fate of becoming a fattened up, watered-down, luxed-up redux of the satisfyingly crisp 570S. Crave silence? Order up a Bentley Continental GT. Want outlier appeal? Make it an Aston Martin. Fancy yourself sportier? Go for an Audi R8 V10, Mercedes-AMG GT, or Porsche 911 Turbo. The 570GT sticks close enough to McLaren’s winning formula to distinguish itself in this rarified segment.

But once its target audience scratches the GT itch, will this latest model have the legs to carry on? Barely six years into the road-car game, McLaren has treaded on new ground with this delicately modulated spinoff, a move which may or may not help broaden the market for the niche brand.

Can you hear the turbo whine? It sounds like the future in all its beautiful, uncertain glory. 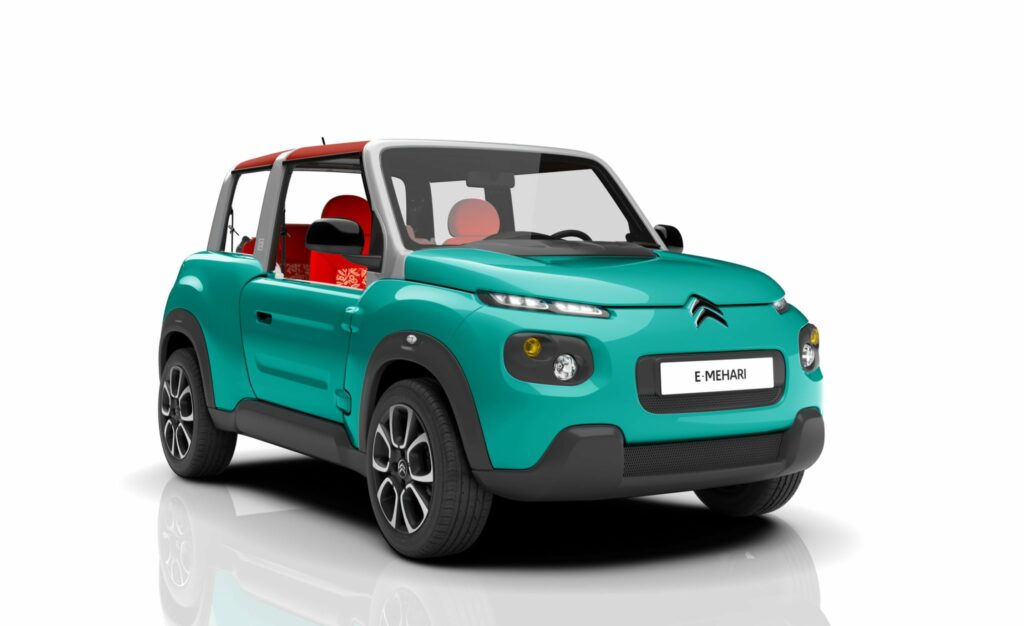 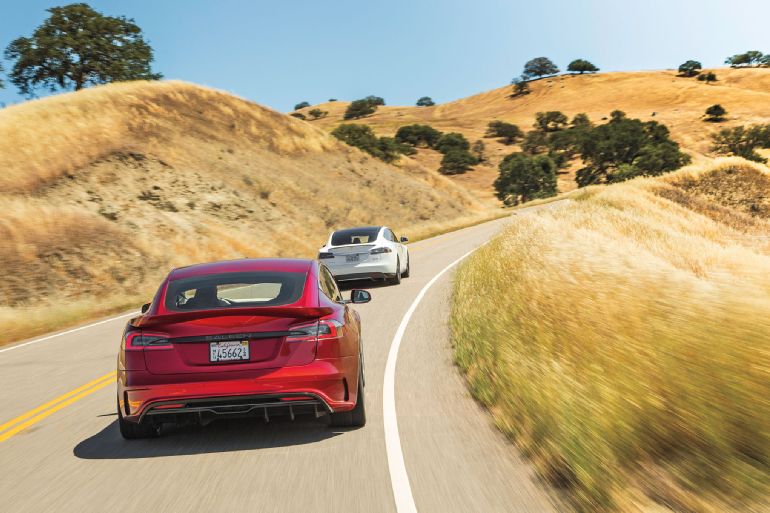