Porsche is replacing the naturally aspirated flat-six in the 2017 911 Carrera and Carrera S with a brand-new, more efficient turbocharged engine. Does it still excite?

The 2017 Porsche 911 is, in most respects, a normal mid-cycle refresh of the current model. It sports such subtle changes like LED sidelights, new Xenon headlights, more sculptural taillights, motorized nasal air intakes that close above 10 mph, and a new all-black rear air intake with longitudinal rather than horizontal slats. The red Carrera S we’re riding in wears only minimal camouflage: two strips of body-color tape at one end, two faux transparent taillight covers at the other. Most passersby will just see another 911.

Look closer, though, and you’ll spot the two intercoolers stowed away in the rear fenders. They cool a new turbocharged, 3.0-liter flat-six. The base Carrera has the same engine in 370-hp tune. Here in the Carrera S, it produces 420 hp at 6,500 rpm. As far as the maximum torque is concerned, it’s 332 lb-ft against 369 lb-ft in the Carrera, which is available from 1,700 to 5,000 rpm in both trims. That’s a boost of about 20 hp and about 45 lb-ft over its predecessor, which isn’t much. But Porsche claims the way in which that power and torque is delivered makes all the difference.

With a dual-clutch automatic, the Carrera S can accelerate to 60 mph in 3.7 seconds, eclipsing its predecessor by 0.4 seconds and edging the 430 hp, 2015 GTS by one-tenth of a second. Top speed climbs by a token 1 mph in both Carrera and Carrera S. And then there’s the real pay off: Consumption drops by between 6 and 13 percent in European testing. (U.S. fuel economy estimates are still not out.) 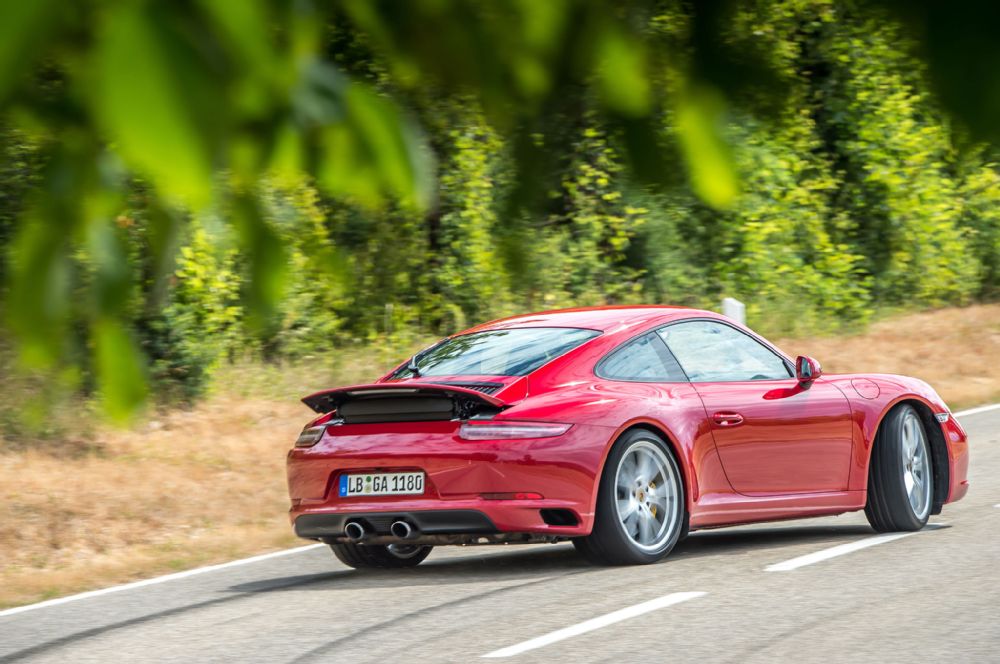 Achleitner (August Achleitner, chief engineer for the 2017 Porsche 911) says he prefers to operate the Carrera S in manual mode, “so that I’m always close to that wide sweet spot, where this engine responds without delay.” Without delay? From a passenger perspective, there is no turbo lag as such, but somehow the throttle action does not feel quite as electrifying as we remember it from the soon defunct GTS motor, which reached its cut-out speed 500 rpm later. There’s now so much low-end power that there’s now no real need to tap the 2,300 rpm that lie between the torque summit and the performance peak.

“We worked long and hard to make the new [engines] sound good, to give them a voice of their own,” says Achleitner, changing the subject. “It was a difficult task, but I am happy with the result.” While the run-of-the-mill versions are said to be a little more decibel-conscious, our test car is fitted with the vocal sport exhaust, which trumpets through two fat tailpipes positioned below the license plate. Full acceleration makes horses prance, sends birds flying, and arches the backs of resident cats. Who said noise pollution?? 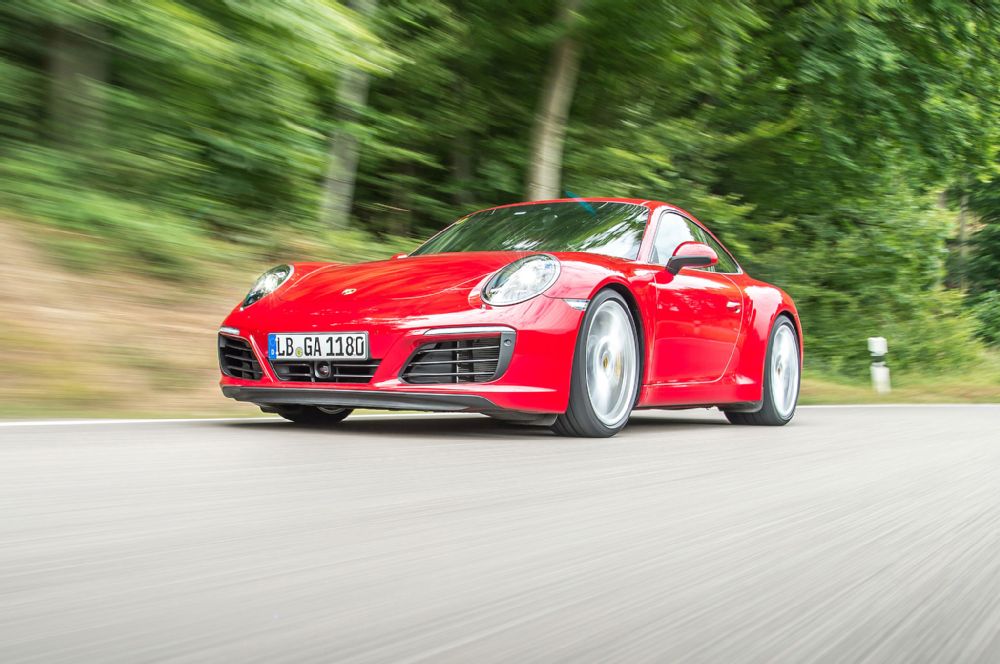 What about the extra weight for the turbos, intercoolers, and related plumbing? Does it upset the already rear-biased weight distribution and the handling balance? “Not the case,” states the man at the wheel, without batting an eyelash. “On the contrary, the [911] feels even more relaxed at speed, and the front axle in particular is firmly planted.” Achtleitner sets the drive program to Sport, presses the stability control button, and breaks out a mischievous grin. “We developed a new slide-without-regret mode, which permits astonishing drift angles yet prevents you from ending up in the ditch. It’s a software thing supported by rear-wheel steering, which can now be specified for the Carrera S.”

“We reprogrammed the [adaptive dampers], and this is the result: better low-speed ride, more progressive response, decent compliance even in combination with 20-inch tires. Also, the front axle can now rise 30mm [about 1.2 inches] to climb up steep ramps and tall curbs.” That’s nice, Herr Achleitner, but this particular extra costs about as much as a dozen replacement bumpers. 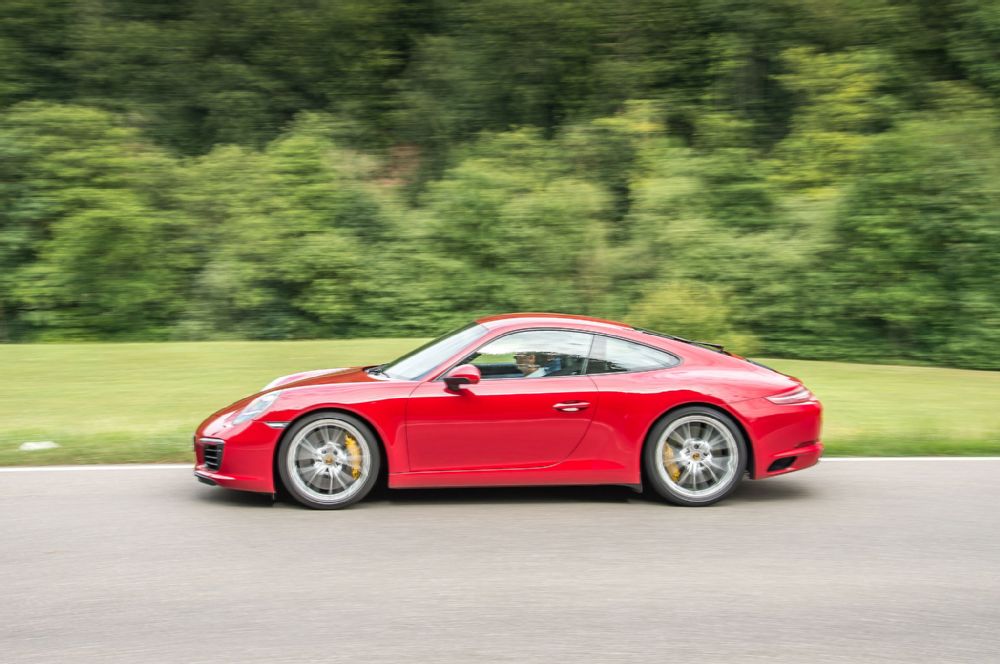 Still, we see Achleitner’s point: This 911 aims to be even more comfortable every day than its predecessor. Thanks to a long-legged top gear, an eager-to-upshift automatic, and the ability to coast under trailing throttle, this Porsche is a remarkably relaxed and efficient cross-country cruiser.

At the other end of the spectrum, that distinct willingness to burn rubber and peel tarmac has been retained and refined. All it takes to access the dark side of the car’s character is a flick at the mode selector integrated, Ferrari-style, into the new sport steering wheel. There are five different attitudes to choose from: Normal, Individual, Sport, Sport Plus, and Sport Response, the last of which is clearly tuned for track use. The modes change the character of the powertrain, dampers, rear air dam, and exhaust. That’s a lot of choice, yet we’d ask for even more, specifically the ability to tweak the automatic transmission and engine separately. Why? Because there is no need to mate a very fast throttle response to an unsuitably low gear and correspondingly high revs. Of course, you can still control your shifts all the time with the seven-speed manual transmission, which has been upgraded for 2017 with a double-plate clutch for more precision and less effort. 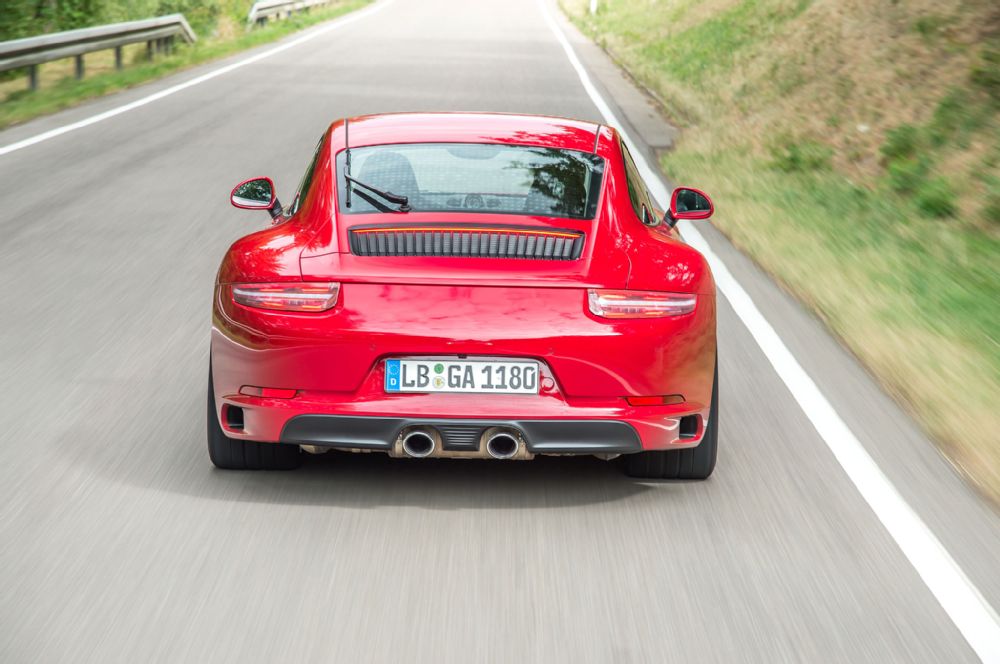 We approach our exit much too soon. At the lights, we turn right and storm up the hill toward Weissach. One more chance to high five the rev limiter at 7,300 rpm, to let my broad back cushion the full-throttle upshift kicks, to boo the fake double-declutch as we slow down for the main gate. Game over. Driver change? Sadly, not until the official launch of the 2017 Porsche 911 in November. We hear the coupe and cabriolet go on sale late this year, followed through 2017 by the Turbo proper — which will feature a 4.0-liter engine — the C4 variants, and the Targa.